You are at:Home»Immigration Issues»Crime»SPLC Continues Scamming the Media and Public with Phony Claims 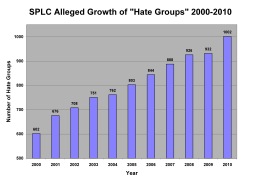 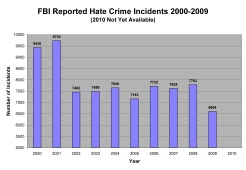 What gives is that the SPLC uses an invented and undefined “hate group” label to stigmatize groups they don’t like and then claim that the number of those groups is rising each year. On the other hand, the FBI uses a well-defined, legitimate and measureable term “hate crime” and simply reports the facts.

The facts contradict the bloated claims the SPLC uses year after year to retain their relevancy. So instead, the SPLC often cites that specific populations – Hispanics for instance – are increasingly victimized as a result of the “heated rhetoric” of the immigration debate. Here again, the facts say otherwise. In 2000 there were 763 Hispanics victims of hate crimes, while in 2009 there were 692. When properly indexed to account for Hispanic population growth during that period, the incidence of hate crime against Hispanics has dropped 34.6%.

That’s very good news for America, but very bad news for the SPLC. Less crime doesn’t stoke the donor base of an organization whose fortunes depend on creating the illusion that there is a surge of dangerous groups operating in America. And it doesn’t keep their membership in a perpetual frenzy – or a perpetual state of giving. But inventing “hate group” labels and claiming that America’s internal threats are rising does. And it delights the SPLC’s “non-profit” fundraising department which generates fistfuls of money by manufacturing bad news – donations of $32.8 million and total assets of $250.8 million to be exact, according to their most recently filed 990.

Granted, the far-left agenda of this organization has been obvious for years; most Americans know that the SPLC would indict a ham sandwich as an extremist threat if it served their goals. Yet, their attacks are increasingly vicious and the SPLC’s list of individuals and organizations they identify as “hate groups,” and whom they hope to silence, is expanding. Most disturbing is the fact the SPLC has never been held accountable for their actions, further emboldening its McCarthy-like crusade.

So What is a “Hate Group”?
The short answer is “who knows?” No definition exists for “hate group” in federal statutes or anywhere in any law. The label was concocted by the SPLC and the organization itself has offered only vague and varying definitions, which makes the term an exceptionally flexible weapon for it to wield, and exceptionally difficult weapon for a victim to counter. Since the SPLC has taken it upon itself to determine what constitutes a “hate group,” just about anyone can be tarnished. Lacking any useful specificity, the SPLC uses this highly charged term to dupe the public, stir the pot and increase fundraising.

Undisciplined journalists unwilling to test the accuracy of the information or question the motives of the source, simply parrot the “hate group” labels. And of course, if a lie is repeated often enough it becomes perceived as truth. In the electronic age of researching decades old information, and in which everybody and his brother is pretending to be a credible “reporter” on the internet and on blogs, the myths and exaggerations keep getting recycled and keep getting more extreme.

Are there nefarious individuals operating in America? Absolutely, and they should be tracked and stopped. But allowing the SPLC to have free license to affix inflammatory labels to individuals and groups whom they oppose politically is antithetical to a healthy democracy and tramples our precious First Amendment rights.

Ultimately, the actions of the SPLC demonstrate that its goal isn’t stopping hate, it’s shutting down debate.