You are at:Home»Immigration Issues»Population»What 7 Billion People Means for Immigration

Today, the birth of a baby jolts world population to a record breaking 7 billion people. Yet this comes as no surprise given global population trends. We, as a world, are reproducing at alarming rates. To put it in perspective: we reached 1 billion people around the turn of the 19th century; conquered our next billion 220 years later during the roaring 1920s; 3 billion appeared only 40 years later in the 1960s; we then doubled in size to 6 billion people on October 12, 1999; just twelve short years later, we have grown by yet another billion. 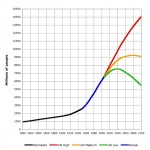 Where does the United States fit into this expanding puzzle? And what does this have to do with immigration? Historically, when a place becomes overcrowded and opportunities dwindled, people relocate. However, as we inhabit and develop the world, immigration can no longer solve our overpopulation problems. While the numbers of people are growing, the Earth and her resources are not.

The United States, with all her space, has provided ample opportunities for people to immigrate in search of new opportunities. However, we have a capacity and we are fast approaching it if we are not already there. The U.S. government allows more than a million people to come here legally every year, a far more generous number than any other country, not to mention incomparably larger than our emigration figures. Though global population is increasing, we can no longer be that outlet for other countries’ population woes. We have a national responsibility to protect the land we have inherited.

The rate at which world population is increasing is not sustainable. Neither is the rate at which the U.S. is growing due largely to immigration, both legal and not. As the world is growing, we can no longer afford to take in more people than our capacity allows. The results lead inevitably to increased dependence on foreign oil, larger carbon footprints, and decreased farmable land to produce food. As the rest of the world faces these same problems, the United States can still play a constructive role by assisting other nations to develop their resources – both human and natural – and develop strategies to bring population growth under control. But, even as we help other nations, we need to make sure we protect our national interests – and in this increasingly populated world, it starts at our borders.