You are at:Home»Immigration Issues»Crime»Welcome, and not Welcome, in New York City 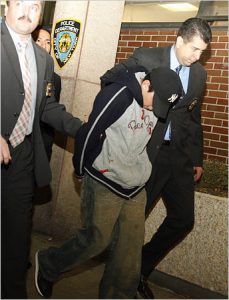 Guess who is welcome in New York City?

The guy hiding his face under the Yankees cap is Diego Pillco, an illegal alien from Ecuador who murdered an aspiring actress, Adrienne Shelley in her New York City apartment in 2006. Thanks to sanctuary policies strictly enforced by Mayor Michael Bloomberg, no one was to lift a finger or a phone to remove Mr. Pillco from New York City.

But guess who is banned in New York City (if Mayor Bloomberg gets his way)?

Yes, that’s Mr. Big Gulp, whom Mayor Bloomberg is seeking to ban from New York City along with other sugary soft drinks exceeding 16 oz. It may be too late to save Adrienne Shelley, but if Mayor Mike gets his way, other aspiring actresses will be protected from looking “too fat in those jeans.”

New York society
Previous ArticleFind Out the Truth Behind “The Morton Memos”
Next Article Do We Really Need to Expand Immigration in the Name of Economic Prosperity?