You are at:Home»Immigration Issues»Border Security»Facts Dispel Myth that Obama Has Increased Deportations 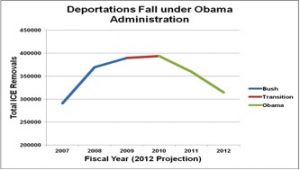 For several years, those following immigration policy have been perplexed by seemingly contradictory events. While President Obama has been dismantling most immigration enforcement and putting into place a massive amnesty for two million illegal aliens, the Department of Homeland Security (DHS) has been claiming that deportations are increasing to all-time highs.  How can this be true?

The simple answer is that it isn’t true. Deportations are decreasing and the administration has been fudging the numbers.

Now, thanks to the investigative work of Rep. Lamar Smith (R-Texas) we learn that the total number of deportations – including both criminal and non-criminal – is falling as well.  The reason is that DHS has revised their definition of what constitutes a “removal” and developed a new trick for keeping track.

The accounting is deceptive, yet obviously self-serving.  After all, any little leaguer could trump Hank Aaron’s RBI record in baseball provided they simply took it upon themselves to redefine what constitutes a major league RBI.

Properly accounted for by using an apples-to-apples comparison, the Obama deportation numbers reflect quite a different story (see graph).

Deportations began rising under President Bush in 2007 (only after he finally began taking enforcement seriously and was rebuffed for trying to enact amnesty)  and continued into Obama’s first year in office. But Obama cannot claim credit even for that.  The brief increase was the result of hundreds of thousands of illegal aliens put in proceedings under Bush. This “pipeline” of cases carried over into the Obama administration.  After the initial rise, deportations have fallen.

The President has been able to hide his non-enforcement policies behind a thinly veiled claim of increased deportations which has helped him play both sides of the fence.  For special interests demanding amnesty, he’s dismantled most interior enforcement and put into place guidelines to grant millions of illegal aliens deferred action.  For those wanting some semblance of enforcement – a rule of law – he’s fabricated a thinly veiled claim of increased deportations.

Since that ruse is now over, we wonder what will be the new “yes, but” arguments made by this administration and amnesty groups desperate to have something with which to sugarcoat their bitter pill of amnesty while they continue gutting the orderly administration of immigration laws.