You are at:Home»Immigration Issues»Crime»Amnesty Watch – 3,000 Illegal Aliens Applying Every Day for Deferred Action

This past June, President Obama bypassed Congress and stunned the nation by unilaterally enacting a deferred action amnesty for young illegal aliens. At that time, many groups – including FAIR – estimated that upwards of 1.7 million people might apply but were dismissed as alarmists by amnesty advocates claiming that only a small number of select individuals would qualify.  Yet, based on the current flood of applicants, and future projections by Department of Homeland Security (DHS) Secretary Janet Napolitano, that initial estimate appears astonishingly accurate.

From August 15 to the third week of October, about 200,000 illegal aliens submitted applications seeking relief from deportation and asking for work authorization.  As confirmed by Napolitano, about 3000 illegal aliens are flooding the United States Customs and Immigration Service (USCIS) every day with applications.  Based on the current rate, 416,000 applications can be expected by the end of this year. 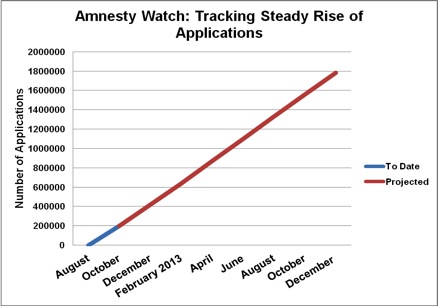 The large volume of applications for deferred action, however, is likely to intensify in 2013, as Napolitano told a panel of educators this week, “I suspect that we may see a bulge of applications after the New Year when there’s either this administration or a new administration and when the policies are going to become clearer.”  This is one time we believe her. Illegal aliens may need a bit more time, clarity and more assurances that submitting applications will not subject them to deportation.  Despite the fact that the deferred action guidelines prohibit a denied applicant from being “referred to ICE for purposes of removal,” some illegal aliens apparently remain cautious about coming forward to apply.  As more applications are submitted and approved, that hesitation will dissipate, the ‘bandwagon” effect will kick in, and a mad dash for amnesty will increase the volume.

Napolitano didn’t suggest just exactly how big a bulge of applications could be expected next year but even if it were a 25% increase, USCIS could be on the receiving end of 3750 applications a day in 2013.  At that pace – combined with this year’s total of 416,000 – by the end of next year, 1,784,750 applications will have been received.  This total would be just slightly over the original estimates.

Given that almost 15% of the entire illegal alien population in the U.S. will be seeking amnesty, it begs the question of how the massive glut of applications can be carefully reviewed for background checks, how national security concerns are being addressed and how many applications will be ultimately approved.

Currently, the government is approving about 162 applications per day.  Even at that rate, USCIS would be hard-pressed to properly review each application.  But with 3000 new applications arriving each and every day, at what point does the backlog become so overwhelming – and the political pressure so intense – that USCIS simply implements a rubber-stamping assembly line?