You are at:Home»Federal»Rep. Black Questions Napolitano Over ICE Release of Illegal Aliens 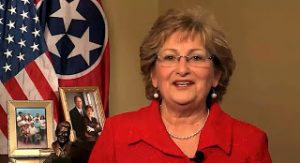 Outraged over the release of illegal aliens from the U.S. Immigration and Customs Enforcement, Rep. Diane Black (R-TN) sent a letter to Janet Napolitano, Secretary of Homeland Security. In the letter, which was obtained by Buzzfeed, questions the motivations behind the decision:

Using the sequester as an excuse to initiate this unprecedented  mass release of illegal immigrants is a patently political and deliberate move that undermines law enforcement  and places our nation’s security at risk.

In addition to releasing illegal immigrants already in custody, you have stated your intent to use the sequester to circumvent the law and to further limit your Department’s detention and removal efforts.  During a White House news briefing on February 25, 201 3 you stated, “Under sequestration, ICE will be forced to reduce detention and removal and would not be able to maintain the 34,000 detention beds as required by Congress.”

Black’s letter echoes many of the same questions raised House Judiciary Committee Chairman Goodlatte and Senate Judiciary Committee Ranking Member Grassley in their own letter submitted to Napolitano. As reported in The Hill, they asked why the illegal aliens were released when DHS has more than $9 billion in unobligated funds:

While the Department released illegal alien detainees into the population on the basis of cost cutting, we find this decision particularly troubling because the Department has carried or will carry forward billions of dollars in fiscal years 2012 and 2013.  Last year, the Department announced an unobligated balance of over $8 billion.  The Office of Management and Budget projected that at the end of fiscal year 2013, the Department would have more than $9 billion in unobligated funds.

Simply blaming budget reductions as a means to turn a blind eye toward the national security of the American people is a dangerous plan and one that calls into question the Department’s preparations for sequestration.