You are at:Home»Federal»Senator Sessions Discusses Amnesty on Mark Levin Show 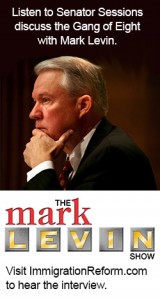 During last Wednesday’s show, Senator Sessions summarized the plan to rush an amnesty bill through the House & Senate in the next few months. Download the recording today if you want to catch up on what’s going on in the U.S. Senate with the Gang of Eight.