You are at:Home»Federal»Lunch this Wednesday: Call Your Member of Congress 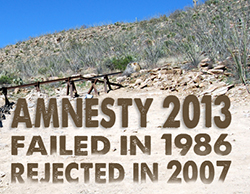 Do you have plans for lunch this Wednesday, April 10?

We know that pro-amnesty groups are converging on Capitol Hill for a rally and setting up meetings with Members of Congress. With the help of labor unions, the big amnesty groups intend to bring “tens of thousands” of protesters to Washington, DC.

Join with other FAIR activists in calling your U.S. Representative and Senators during your lunch break that day. Remind him or her that the government never made good on its promise to enforce immigration laws when it granted amnesty to roughly 3 million illegal aliens in 1986. Rather, the amnesty only encouraged more illegal aliens to come to the U.S. with the hope of a future reprieve. If you need help, FAIR has put together helpful suggestions for discussing amnesty with your elected officials in our new activist toolkit.

Now that the number of illegal aliens has quadrupled to 11-12 million, the pro-amnesty lobby wants Congress to make the same mistake again. The American people must tell Congress that despite new marketing and talking points, another amnesty won’t work in 2013—especially with 22 million Americans unemployed and underemployed.

Let’s challenge their efforts with a national call-in day and make sure that while our elected officials are visiting with the pro-amnesty lobbyists, their phones are ringing off the hook! You can look up the phone numbers for your members of Congress by entering your ZIP code here.

Amnesty groups are meeting on April 10 to commemorate a rally they held that same day in 2006. Their efforts failed when supporters like you helped defeat the amnesty legislation Congress was considering at the time. On Wednesday during lunch, we need your help in reminding Congress why these previous attempts failed.

We also need your help in letting new Members of Congress know that Americans oppose amnesty just as much now as they did then. In fact, more than 40 new Senators have taken office since the last time Congress took up comprehensive immigration reform.

FAIR has all the information you need to find your Members’ numbers and express your opposition to amnesty for illegal aliens compiled for you in our activist toolkit. Check it out now.

Invite all your friends and make plans now to call your U.S. Senators and Representative on Wednesday during your lunch hour!