You are at:Home»Federal»AFL-CIO Now Bullying in Spanish

During the amnesty rally on Wednesday, the Financial Times reported that the AFL-CIO’s Ana Avendano declared:

Politicians know that if they stand in the way of citizenship we will steamroller them. That’s a fun evolution.

That’s a strong statement to be made from the director of immigration at the country’s largest labor union. Realizing that our supporters and activists should hear about the current environment surrounding the immigration debate on Capitol Hill, FAIR posted this graphic on our Facebook page. 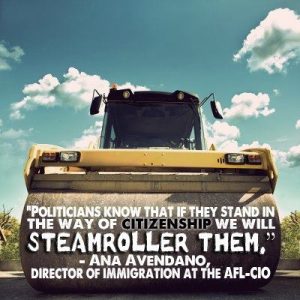 On Friday afternoon, the AFL-CIO doubled-down on Avendano’s statement with a tweet from their official AFL-CIO Latino account: 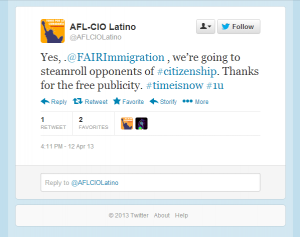 Yes, @FAIRImmigration, we’re going to steamroll opponents of #citizenship. Thanks for the free publicity. #timeisnow #1u

A few minutes later, they sent the same tweet translated into Spanish:

Regardless of whether this was bullying, a threat or a promise, Americans should hear what’s being said by the pro-amnesty lobby and see the immense pressure they are exerting on Congress to give into their demands.

The anticipated legislation from the “Gang of Eight” could be up to 1,500 pages long. With efforts to rush this bill through Congress, the American people deserve to hear an open debate and committee hearings on the details of the not-yet-released legislation.

Furthermore, the AFL-CIO’s website claims that they represent 14.8 million Americans who are members of labor unions. Statements — issued repeatedly over the course of several days — that they plan to “steamroller” those who support defending our borders and enforcing current laws, should alert the American people to how seriously pro-amnesty forces are taking this legislation.