You are at:Home»Immigration Issues»Border Security»Paul Ryan’s Favorite Book is Definitely not the Dictionary

Paul Ryan has declared that he will debate anyone who says the Gang of Eight bill is amnesty. This from a man who by comparison made Joe Biden sound like Demosthenes in their vice presidential debate last fall. 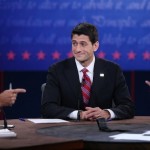 Ryan’s argument is that granting amnesty to 12 million illegal aliens is not amnesty because he has decided to call it “earned legalization.” What does he mean by “earned legalization?” Why, amnesty of course. Sadly, Ryan is what passes for the “intellectual leader” of the GOP these days.

It would not be difficult for Paul Ryan to find out the meaning of amnesty, and to discover that there is no such recognized term as “earned legalization.” He could click here, or here. Or he could pick up an actual dictionary, any dictionary will do. They are quite weighty publications, so he could strengthen both body and mind.

To save him some time, I’ll provide him with a standard definition.

He could also consult his hero Ayn Rand Ronald Reagan, who had no problem understanding plain English or the plain truth. Heck, he can even quote Marco Rubio, circa 2009.

If Ryan is serious about debating this issue (though he ran from the very first opportunity to do so) he might want to acquaint himself with existing U.S. law. In it, he could discover that the penalty for an alien who is illegally in the United States is deportation and either a three or ten year bar from applying to reenter the country. The Gang of Eight waives these penalties for illegal aliens, as well as forgiving identity theft, filing a false tax return, etc., etc, etc. This is amnesty.

Ryan’s argument is that illegal aliens won’t receive amnesty because they will have to “pay a fine [and]back taxes.” The “fine” is nominal, $2,000 and can be paid out over the span of 10 years, and can be waived at the discretion of the Secretary of Homeland Security. Ryan’s assertion that the Gang of Eight bill requires amnestied aliens to pay back taxes bill is simply untrue. But the larger point is that this amnesty may indeed have certain conditions, but that only makes it a conditional amnesty –which is what almost every amnesty is.

Take one example. A tax amnesty doesn’t mean tax scofflaws get off scot free. It means that the penalties for not paying taxes are reduced or waived. That’s the amnesty part. Most importantly, it does not entitle tax cheats to continue to avoid paying taxes in the future.

The amnesty Ryan is defending is coupled with the inestimable reward of allowing those who violate U.S. immigration law to remain in the United States and eventually to gain citizenship and full access to each and every benefit offered by local, state, and federal governments. In other words, after paying a small fine (perhaps) for having entered, resided, or worked in the United States illegally, they gain the benefit of entering, residing and working in the United States legally.