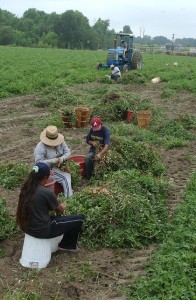 The Obama administration has issued another slick report urging adoption of the U.S. Senate’s version of comprehensive immigration reform (S.744) in order to meet the labor needs of agricultural producers. The report ignores the role of mechanized agriculture, and it ignores the current ability of farm employers to bring in an unlimited number of foreign workers to harvest their crops.

The report says, “But among all economic sectors, the U.S. agriculture sector is particularly reliant on foreign-born workers.” This statement misleads the reader to equate handpicked fruit and vegetables with the mechanized harvest of grains. The latter represents a much larger share of the nation’s agricultural production and exports. The changes proposed in S.744 would have virtually no effect on the grain production or exports.

The report continues, that to meet employers’ needs, “Among its most important provisions, the bipartisan bill would provide an earned path to citizenship [amnesty]for unauthorized farmworkers who are vital to our nation’s agriculture industry, and a new temporary worker program negotiated by major grower associations and farmworker groups.”

The report  misleads implying that seasonal crop employers are dependent on illegal alien workers. The H-2A visa program – discarded in the report as unworkable – allows an unlimited number of temporary workers. It is not liked by employers because it requires employers to hire U.S. workers first and attempts to stabilize wages that have been depressed by the employment of illegal workers.

The report also fails to recognize that the U.S. has fallen behind in mechanization in harvesting. This is due to the depressed wages caused by hiring illegal workers. If those workers were not available or not so cheap, employers would have greater incentive to invest in already existing machines to harvest their crops. This sort of capital investment in mechanized harvesting occurred long ago for cotton and grains and more recently for tomatoes, and is increasingly the case for grapes.

Finally, the report ignores that the S.744 amnesty will not legalize all illegal aliens because those who came recently are not included – although that will depend on whether fraudulent applications are ignored. Many of them will still be working in agriculture as will many of the continuing flow of illegal aliens that the Congressional Budget Office estimates will continue to come under the provisions of S.744. This means that the S.744 concept to amnesty for illegal aliens will offer little benefit to those working in agriculture, because employers will continue to have a supply of illegal workers to exploit even if many of those who receive provisional legal status leave after five more years in the fields.

When the White House issues a report on an important national issue, shouldn’t we be able to expect it to be an objective assessment of the policy issue rather than a slick one-sided argument designed to mislead the public?