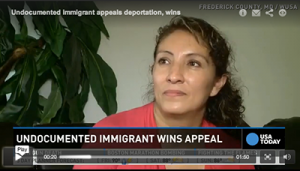 Last Wednesday, the United States Court of Appeals for the Fourth Circuit ruled that “absent express direction or authorization by federal officials, state and local law enforcement officers may not detain or arrest an individual solely based on known or suspected civil violations of federal immigration law” in Santos v. Frederick County Board of Commissioners.

The Court found that Frederick County Sheriffs violated an illegal alien’s Fourth Amendment right against unreasonable search and seizure when the officers detained the alien based solely on an outstanding ICE civil immigration warrant.

In 2008, Santos, an illegal alien from El Salvador, was approached by the deputies outside her place of employment where they asked her for identification. Santos produced an El Salvadorian national card. The officers consulted with law enforcement dispatchers and determined that an active civil immigration warrant existed for Santos requiring her immediate deportation. The officers placed Santos under arrest and held her in a Maryland detention center until she was transferred to federal custody.

The Fourth Circuit agreed with the district court that Santos was “seized” for Fourth Amendment purposes. The question remained whether the seizure was unconstitutional. The court noted that they have held that state and local law enforcement officers may detain or arrest an individual for criminal violations of federal immigration law so long as the seizure is supported by reasonable suspicion or probable cause and is authorized by state law.

But relying on the recent U.S. v. Arizona U.S. Supreme Court opinion, one sister circuit court opinion, and two district court opinions, the court found that state and local law enforcement officers may not detain or arrest an individual for civil violations of federal immigration law, such was the case with Santos. As a result, the Court held the officers violated Santos Fourth Amendment right to be free from unreasonable search and seizure when they seized and arrested her based on an ICE civil immigration warrant.

In so holding, the court noted that, although the Frederick County Sheriff’s office had a 287(g) agreement in place, the two deputies were not trained under the agreement and therefore were operating outside the law. The court rejected the deputies argument that 287(g)(10), which expressly states no agreement is required for state and local officers to “cooperate with the Attorney General in the identification, apprehension, detention, or removal of aliens not lawfully present in the United States,” applied to them. Again relying on the Arizona opinion, the court stated that state and local officers may only rely on the provision if, at minimum, federal officials have given direction or authorization, which did not occur here until long after the arrest when the immigration hold was placed on Santos.

Despite finding the deputies violated Santos’ Fourth Amendment right, the court agreed with the district court that the officers have qualified immunity because the constitutional right was not clearly established at the time of the detention and arrest. Consequently, the court dismissed the claims against the deputies.

The court, however, reversed the dismissal by the district court of the claims against Frederick County as qualified immunity does not apply to municipal defendants or government employees sued in their official capacity. The court has remanded the case to the district court to determine whether the officers’ unconstitutional actions are attributable to an official policy or custom of the county or the actions of a final policy maker. If the officers’ actions can be attributed to their employer, and are not just the rogue, unauthorized acts of individuals, then Santos will win a judgment against the county. If she cannot prove that such a policy exists, she will lose on the merits of the case.

Santos has been granted a temporary suspension of her deportation order. She told WUSA9 that she hopes the federal government will pass amnesty legislation by the time this case is final.

In response to the ruling, the Frederick County Commission passed a resolution supporting the sheriff’s department:

Frederick County commissioners passed a resolution Thursday in support of the sheriff’s department, said commission President Blaine Young, who wants to make his county Maryland’s “most unfriendly to illegal aliens.” He vowed that county officials would continue to enforce immigration laws to the extent they can.

Maryland Santos vs. Frederic County Board of Commissioners U.S. vs. Arizona US Court of Appeals
Previous ArticleRubio Tries Image Repair in Florida
Next Article Marco Rubio: Let’s Pass Amnesty So the President Doesn’t Implement One Unilaterally