You are at:Home»Immigration Issues»Border Security»McCain,Flake “Willing” to Negotiate with House 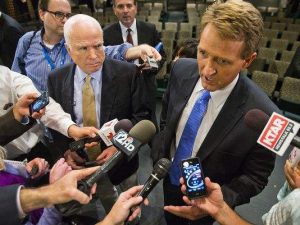 During a forum in Mesa, Arizona, Senators John McCain and Jeff Flake announced that they were willing to negotiate with the House of Representatives in order to pass “comprehensive” immigration reform. They also expressed that the House’s piece-meal approach was acceptable as long as the two Chambers would go to conference with their respective pieces of legislation. (Source: CQ Today on Aug. 27, 2013)

However, both members of the Senate Gang of Eight, indicated that citizenship for illegal aliens as part of an amnesty deal is non-negotiable. CQ and MSNBC report that McCain said:

You have a bit of a quandary here….If we were to say that individuals who come here on a work permit or those who were just made legal had access to federal benefits like Obamacare, you’d have an outcry.

Although the House only has 36 scheduled working days left this year and a full agenda of other issues to address, the McCain stated that he thinks there is time to pass an amnesty bill. According to MSNBC, McCain said, “I remain guardedly optimistic that our friends in the House of Representatives will agree to their legislative process and then we can get to conference.”

The Daily Caller also reported that he isn’t concerned about the tight time frame: “I think there’ll be plenty of time to sort it out if we do not succeed.”