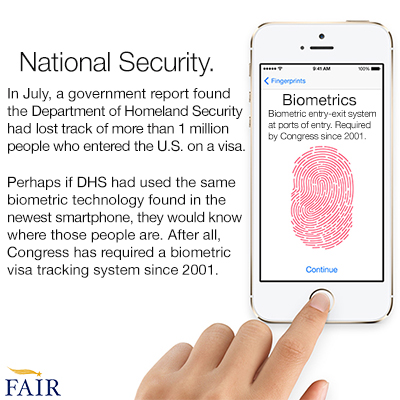 Twelve years after it was required by the PATRIOT Act, the government could not be farther from implementing the biometric entry-exit system, and Congress refuses to force it to act. Meanwhile, the U.S. lacks any reliable system to ensure foreign visitors and temporary workers do not remain in the country once their visas have expired.

Gang of Eight members and other supporters of the Senate amnesty bill have lots of excuses for abandoning a biometric entry-exit system in S. 744. They’ve said it’s too costly – a new report from the Center for Immigration Studies proves otherwise – and that a biometric “trigger” would postpone amnesty indefinitely (oh, darn). During mark-up hearings of the Senate bill in May, Senator Lindsey Graham (R-S.C.) claimed “there are technological barriers” to implementing a biometric entry-exit system.

Fortunately, private industry innovators have called the Senators’ bluff. Today, Apple releases a new smartphone equipped to read the fingerprints of multiple users. This technology will now be at the fingertips of consumers, pun intended, so why won’t the Administration make creating the biometric entry-exit system required by law a priority?

Clearly, the current Department of Homeland Security leadership is more interested in using its alleged insufficient resources to process deferred action applications for illegal aliens and review cases of those already ordered deported, rather than faithfully executing the law. If Congress made implementing the biometric entry-exit system a priority—instead of using its time and energy to draft and debate bills granting amnesty to 12 million illegal aliens while doubling guest workers at a time of record unemployment—it could actually make them.