You are at:Home»Politics»Amnesty Deemed “Essential” During Government Shutdown

DHS Maintains Services for Illegal Aliens, Suspends for Citizens
Despite a government shutdown and the furlough of thousands of federal workers, business as usual continues for most of the Department of Homeland Security (DHS).

86 percent of DHS workers deemed “essential,” must report for work.
A vast majority of DHS employees will work during the shutdown because they are either: law enforcement, critical to the security of the country, or work for part of the agency funded by a different revenue stream – i.e. different appropriations cycle or application fees.

Illegal alien amnesty continues.
Immigration services will still process applications for deferred action. The federal government claims these reviews can continue because the application process is funded by fees. Unfortunately, DHS also has discretion to waive the fees. Over 450,000 illegal aliens have received amnesty under President Obama’s executive action since August 2012.

E-Verify is suspended. Employers cannot verify worker status.
In the meantime, the web-based employment verification system E-Verify is offline. The program is a critical tool for many small businesses because it helps employers ensure only legal workers are hired. 404,000 employers are enrolled in E-Verify. Its suspension is concerning and the reaction from amnesty advocates is alarming. One group joked on Twitter: “E-Verify will be down. Quick let’s go get jobs!” 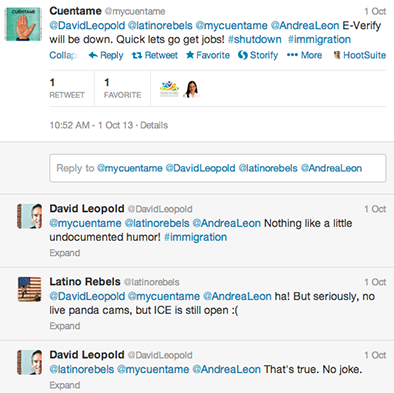 Immigration and Border enforcement personnel remain on duty – but are prevented from enforcing the law.
ICE and CBP agents are law enforcement officers tasked with protecting “life and property” and will continue to work during the shutdown. Some support staff, however, may be deemed “non-essential.” The cruel joke is that ICE agents in particular have been prevented from enforcing immigration laws against large classes of illegal aliens, regardless of the government’s funding status.

In the meantime, there’s speculation as to whether the government shutdown could impact an amnesty rally scheduled for early next week. With national parks in DC closed, the rally may not move forward without push back from Capitol and park police. With some officers furloughed, they have thus far declined requests for permits to use the National Mall.