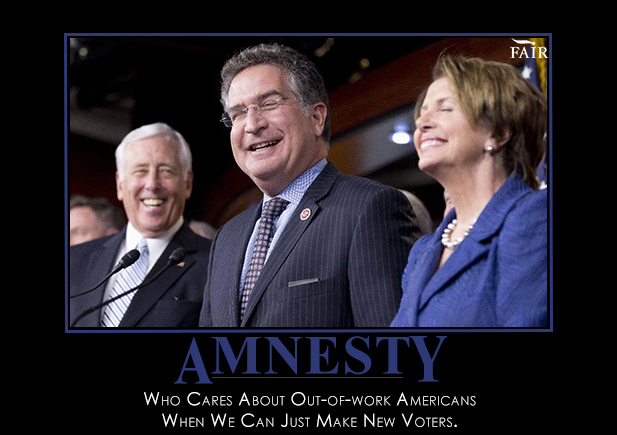 Democrats describe the legislation as the Senate Gang of Eight’s bill with alternative “border security” provisions. As put by Pelosi herself, H.R. 15 contains the “best of the Senate bill,” without the Corker-Hoeven “border surge” amendment, and with the McCaul-Jackson Lee border bill (H.R. 1417) in its place.  Which “border security” provisions the bill contains, however, is completely irrelevant given that: (1) neither actually takes any real steps to secure our nation’s borders, and (2) the bill still contains S. 744’s core amnesty-first, enforcement-later (probably never) approach. (See FAIR’s Comparison of H.R. 1417 and S.744)

H.R. 1417, sponsored by Homeland Security Committee Chairman Mike McCaul (R-Texas) and longtime amnesty advocate Rep. Sheila Jackson Lee (D-Texas) does not require that the Department of Homeland Security actually obtain situational awareness or operational control of any part of the border; it merely requires DHS to submit a plan for doing so. Worst of all, the bill contains absolutely no enforcement mechanisms or penalties if the Department of Homeland Security fails to fulfill its responsibility to create and implement such plans. This, of course, leaves the American people with little hope that our borders will ever be secured, or that any sort of meaningful interior enforcement will be carried out under such legislation. If the Department and its predecessor had taken these responsibilities seriously in the first place, we wouldn’t be at such a crossroads.

But the farce doesn’t stop there. In addition to trying to fool the American people into believing that her bill will secure our nation’s borders, Minority Leader Pelosi also tried to convince the public that her legislation is “100 percent bipartisan.” However, not a single one of the 120 co-sponsors currently listed on the bill is a Republican.

Indeed, GOP leaders in the House have completely dismissed the legislation, saying they will not bring it to the floor for a vote. A spokesman for House Majority Leader Eric Cantor (R-Va.) said the legislation has a “zero percent” chance of making it to the floor.  And a House Judiciary Committee aide indicated that the chairman, Bob Goodlatte (R-Va.), has no plans to even take it up in his committee, which has jurisdiction over the critical immigration issue.