You are at:Home»Federal»FAIR Alert: Tell Congress: ‘No Conference’ on Amnesty 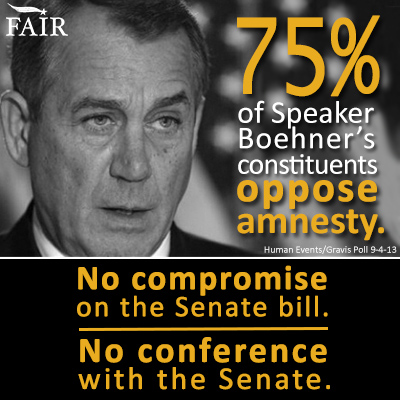 Pro-amnesty supporters have one strategy for Congress this fall: go to conference. Their goal is to pass any kind of immigration bill in the House and then work out the differences for a mass amnesty when the House and Senate hold a conference committee on their different bills.

“Do whatever it takes to go to conference.”

That’s why Rep. Steve Stockman (R-TX) is encouraging fellow Members of Congress to sign a letter to House Speaker John Boehner asking him to pledge “No Conference” with the Senate.

Rep. Stockman’s letter requests that Speaker Boehner not bring up any immigration bills to the floor for a vote without “a commitment that the House will not conference House bills on immigration-related issues with a comprehensive or multi-issue bill from the Senate.” (Read Rep. Stockman’s full letter here.)

Click here to call your U.S. Representative and encourage him or her to sign the “No Conference” letter.

The amnesty lobby plans on a conference between the House and Senate on immigration bills. In fact, long-time amnesty supporter, Senate Majority Leader Harry Reid (D-NV) declared, “If we go to conference, we will win.”

Urge your U.S. Representative to sign the “No Conference” letter by calling him or her today.