You are at:Home»Federal»So-Called Conservative Leaders Flood DC for Amnesty Push 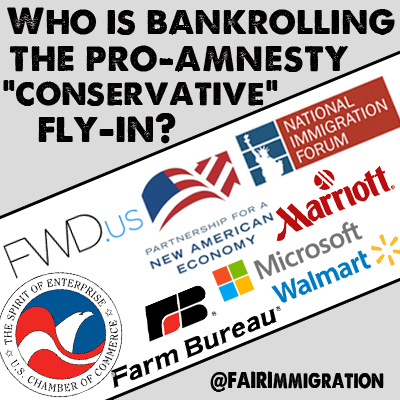 With only four weeks left in the House, amnesty advocates are staging a last-minute Hail Mary legislative push. Billing themselves as “conservative” business, religious, and political leaders, hundreds of pro-amnesty activists are arriving in Washington to begin a week-long lobbying blitz targeting Republicans.

Unfortunately, their claim to conservative credentials wears thin when liberal, pro-amnesty special interests and big business are footing the bill for their travel and lodging:

Big Business & Agriculture: Constant supporters of amnesty and mass immigration for one reason – profits. The American Farm Bureau Federation, Chamber of Commerce, Marriott, Microsoft, and Wal-Mart are all supporting the “conservative fly-in” because they see conservative Republicans on the Hill as their last impediment to amnesty and the continued influx of cheap foreign labor.

So, will the Republicans fall for this charade? Only time will tell but the individuals flying into DC to push them on an immigration bill that will hurt Americans should at least know who they’re in bed with.

Update 10/29/13: The major events surrounding the “conservative” fly-in are taking place today. And, with that, the “Americans for Reform” have released their own graphic highlighting the sponsors  of the lobbying push.

McDonald’s, the National Restaurant Association, and the Western Growers Association were added to the list of sponsors. Unscrupulous employers of illegal labor, purveyors of low wage jobs, and their representatives.

Just last week it was reported that McDonald’s told a full-time employee that rather than getting a raise, she should apply for welfare. What a model company – surely sponsoring this conservative front-group and fly-in for altruistic reasons, not just to help pass amnesty to avoid actually having to comply with laws against employing illegal aliens or avoid paying a living wage to legal workers…