You are at:Home»Immigration Blog Posts»FAIR Alert: Speaker Declares House Will Not Conference with Senate Amnesty Bill 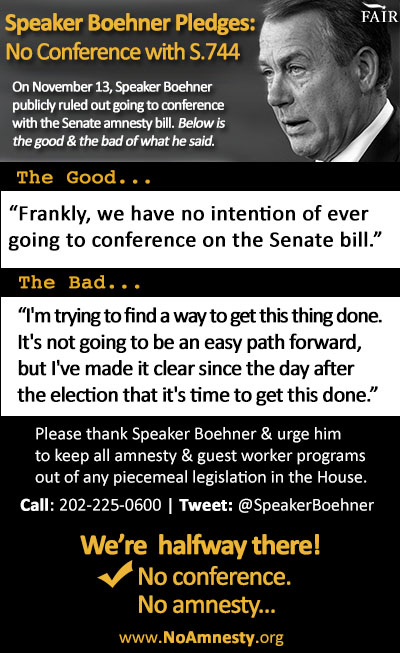 You have been calling for “no conference, no amnesty,” and now we are halfway there!

Yesterday, Speaker John Boehner finally announced that the House of Representatives will not enter into conference negotiations with the disastrous Senate amnesty bill, S. 744.  He told reporters: “Frankly, we have no intention of ever going to conference on the Senate [immigration bill].”

Though Boehner has already promised that the House would only move smaller, “piece-by-piece” immigration measures, rather than “comprehensive” bills like the Senate’s, this marks the first time he has publicly ruled out taking any such smaller bill and entering into conference with S. 744.

Yesterday’s promise is therefore a key moment in our battle, one that never would have happened without your hard work this year!

However, as encouraging as this development is, we must keep up the pressure to ensure that as the House moves through its step-by-step process, it only debates immigration legislation that puts the interests of Americans first. That means no small amnesties and no massive increases in immigration that unfairly flood the labor market.

On the very day Boehner committed not to conference with S. 744, he also reassured special interests:

“I’m trying to find a way to get this thing done. It’s, as you know, not easy. It’s not going to be an easy path forward, but I’ve made it clear since the day after the election that it’s time to get this done.”

We therefore must let the Speaker know that any form of legislation that legalizes illegal aliens or hurts American workers—no matter how it is passed—is unacceptable!

1. Thank him for this important step he has taken.

2. Encourage him to keep all forms of amnesty and mass guest worker increases out of any piecemeal legislation passed by the House.

Any amnesty or mass guest worker bill, comprehensive or piece-by-piece, is bad public policy because: