You are at:Home»Immigration Issues»Border Security»Speaker Boehner Hires Amnesty and Open Borders Advocate to Spearhead Immigration Effort in the House 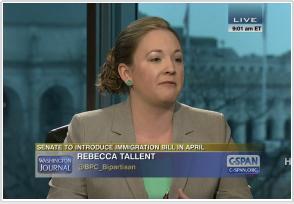 If it wasn’t already clear where the House Republican leadership stood on immigration, it is now. On Tuesday, Speaker John Boehner announced the hiring of Rebecca Tallent to be his immigration policy advisor. Tallent was most recently the director of immigration policy for the Bipartisan Policy Center, a business oriented group promoting amnesty and massive increases in permanent and temporary immigration. Prior to that she worked for Sen. John McCain and helped draft the McCain-Kennedy amnesty bills of 2006 and 2007.

Tallent’s hiring indicates that the only real difference between the Senate sell-out of American workers and taxpayers, S.744, and the approach we are likely to see taken by the House in 2014, is the number of times President Obama will be required to sign his name. It is evident that the Speaker’s step-by-step approach to immigration reform does not entail waiting for empirical evidence that our borders are secure and that immigration laws are being enforced before the demands of the illegal alien and cheap labor lobbies are considered.

In fact, Tallent’s prescription for ending illegal immigration is legal admission on demand. In an interview on C-SPAN in March, Tallent said, “The best things we can do for our border security is to have a realistic guest worker program that reflects the number of people who want to come every year.” In other words, immigration policy should be regulated only by the desire of people from other countries who want to work here and the desire of American businesses to employ them, without regard for the impact on American workers and taxpayers.

The hiring of Tallent confirms that Boehner’s refusal to conference on S.744 is purely a matter of procedure, not a repudiation of the Senate bill itself. President Obama and Senate leaders have already said that they do not care what bill serves as the vehicle to get them to their desired objective of amnesty and massive immigration increases, just as long as they get there. It is clear, as a result of Tuesday’s announcement by Boehner, that the legislative vehicle will be different, but the destination will be the same.