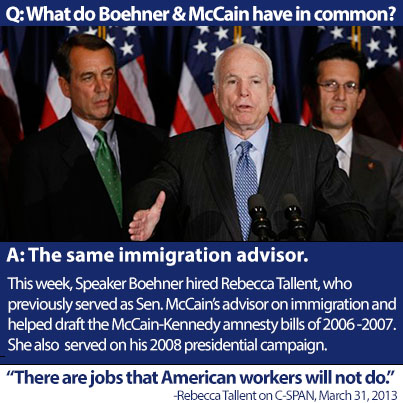 Yesterday, House Speaker John Boehner’s office announced that it had hired McCain’s former chief of staff Rebecca Tallent to manage immigration policy for the Speaker. Tallent, a long-time amnesty advocate, has been involved in numerous immigration battles over the years, including pushing Senator John McCain’s amnesty guest worker bills in 2006 and 2007.

FAIR quickly criticized the hiring of Tallent to manage immigration policy for the Speaker, and said it confirms that Boehner’s refusal to conference on S.744 is purely a matter of procedure, not a repudiation of the Senate bill itself.

Yet, the Speaker’s office defended the move. “The speaker remains hopeful that we can enact step-by-step, common-sense immigration reforms — the kind of reforms the American people understand and support,” spokesman Michael Steel said. “Becky Tallent, a well-known expert in this field of public policy, is a great addition to our team and that effort.”

Now we need you to make your voice heard and take action!

Let him know that you want the House to pass TRUE immigration reform, not amnesty and not massive guest worker bills that undermine American workers. Remind Speaker Boehner:

• Granting any legal status to illegal aliens unfairly rewards law-breaking. Any form of legal status, including DREAM Act-style proposals, are just as much of an amnesty as a “path to citizenship,” and will do nothing but encourage more illegal immigration, just like it did after the 1986 amnesty.

• Granting amnesty and increasing the number of guest workers unfairly adds millions of workers to compete for scarce jobs when over 20 million Americans are either unemployed or underemployed.

• America needs jobs—not increased immigration! The U.S. already has the most generous immigration system in the world, admitting over 1 million legal immigrants annually, along with bringing in 800,000-900,000 guest workers each year.