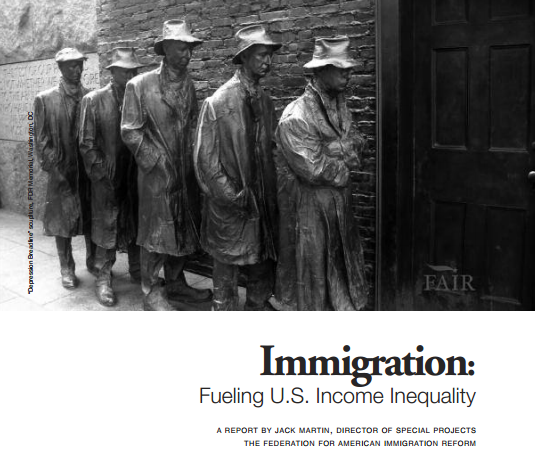 President Obama’s call yesterday for combatting growing income inequality ignored the role of immigration in exacerbating the problem. While it was good to have him ignore his push for amnesty for a moment, it also was irresponsible.

As we and many researchers have demonstrated, one of the factors that has been fueling growing income inequality has been the massive flow of legal and illegal immigrants. (See “Immigration: Fueling U.S. Income Inequality“).

Obama noted that great progress was made in diminishing income inequality between the end of WWII and 1970. Then progress began to slow. While several factors contributed to this phenomenon, President Obama ignored the one over which the United States has the greatest control: immigration. During the period he extolled as the heyday of the American middle class there was a very low level of immigration. The immigration legislation in 1965 restarted mass immigration.

President Obama challenged those who object to his reform proposals, i.e., minimum wage increase, tax reform, etc., to announce their own agenda for combatting the inequality trend. An obvious alternative is to oppose the so called “comprehensive immigration reform” proposal that Obama is pushing, because it would increase the flow of foreign both high and low wage earners and further skew income distribution. The alternative would be true immigration reform that restores moderate immigration like we had between the 1920s and 1965 (but without the national quota system) when employers recruited women and minorities into the workforce because they had fewer foreign workers available.