You are at:Home»Politics»Ask FAIR: What Happens Next With Immigration? 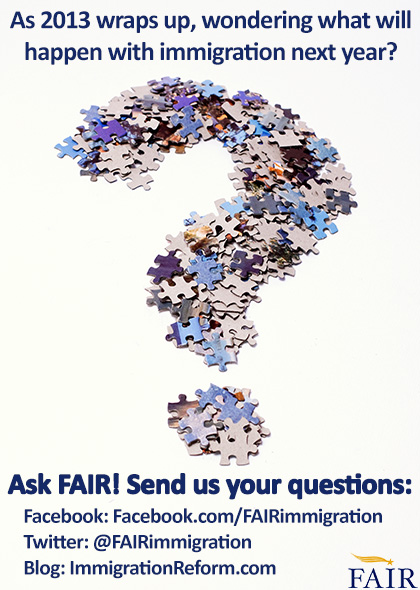 This year’s legislative session is coming to a close and we’re digesting where we’ve been and what will happen next year. We know you’re talking to our Field Team and wondering what you can do to make sure we successfully stop an amnesty bill from making it to the president’s desk.

To that end, we at FAIR want to field your questions about this whirlwind year and what we expect in 2014. Submit them here on our blog in the comment section below, on Facebook or send us a tweet @FAIRimmigration. We will get back to you with a video message next week.

Here are some examples of questions we’ve received recently:

The fight against amnesty and for an immigration policy that serves our broad national interests is not over. Let’s keep the lines of communication open and work together to improve our country through a lawful and sustainable immigration system.