You are at:Home»Politics»The 12 Days of Amnesty: on the 2nd Day…

On the 2nd Day of Amnesty, the Obama administration gave to me… 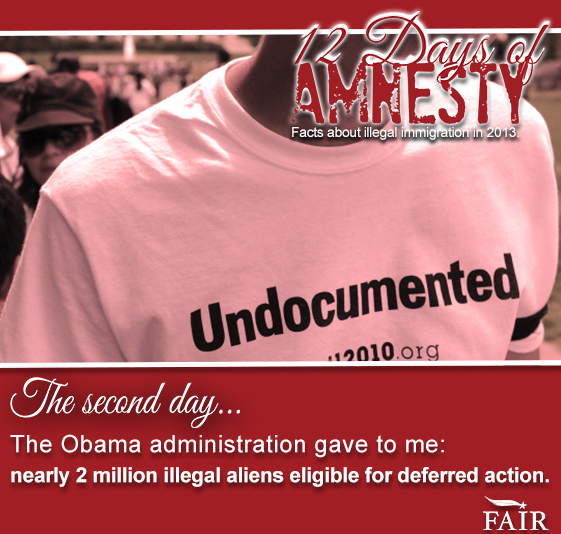 In June 2012, President Obama announced that illegal aliens under the age of 31 who arrived in the U.S. before 16 would be eligible to avoid removal from the U.S.

The Migration Policy Institute (MPI) estimated that 1.76 million illegal aliens could take advantage of the executive amnesty – which allows not only reprieve from deportation but also legal work authorization.

Since its implementation in August 2012, more than 450,000 young illegal aliens have received deferred action. Only 9,578 applications have been denied.

Unfortunately, Congress has not effectively reined in the administration’s abuse of executive power to grant amnesty to entire classes of illegal aliens. As a result, the administration continues to expand on unilateral changes to immigration laws and top White House aide – and former La Raza lobbyist – Cecilia Muñoz recently asserted that deferred action will be renewed “as long as this president is president…”

12 Days of Amnesty Cecilia Munoz DACA La Raza Migration Policy Institute Obama Administration
Previous ArticleJoe Biden, What’s Grandma Got to Do with It?
Next Article 12 Days of Amnesty: on the 3rd Day…