On the 5th Day of Amnesty, the Obama administration promoted… 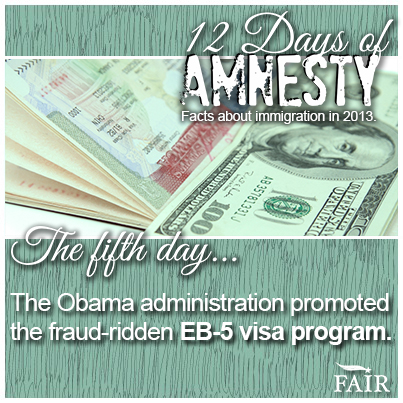 The EB-5 investor visa allows foreign nationals to gain a green card and eventually be eligible for citizenship by investing $500,000 or $1 million in the U.S. – depending on the program. Then, their investment must create at least ten U.S. jobs.

Unfortunately, the program lacks sufficient oversight and is susceptible to fraud. It is difficult to accurately calculate whether an investment actually creates jobs in the U.S. and instances of fraud have been uncovered. And the government even authorizes shady middlemen to help them run the program.

A 2012 DHS Inspector General report found USCIS processors were pressured to rubberstamp EB-5 and other legal immigration applications. And, USCIS director Alejandro Mayorkas – President Obama’s pick to be No. 2 at DHS – is currently being investigated for allegedly helping a Virginia company run by Hillary Clinton’s brother secure an EB-5 visa for a Chinese investor – who had already been denied twice.

The program may also pose a national security risk. Sen. Chuck Grassley (R-Iowa) recently revealed an Immigration and Customs Enforcement (ICE) memo that warns that Iranian operatives may be using the program to “infiltrate” the country.

Ultimately, the very idea of selling entry into the country is unsettling. Rather than identifying and inviting immigrants who are the best fit for our current needs, the EB-5 program allows green cards to be sold to the highest bidder.