On the 6th Day of Amnesty, the Senate gave to me… 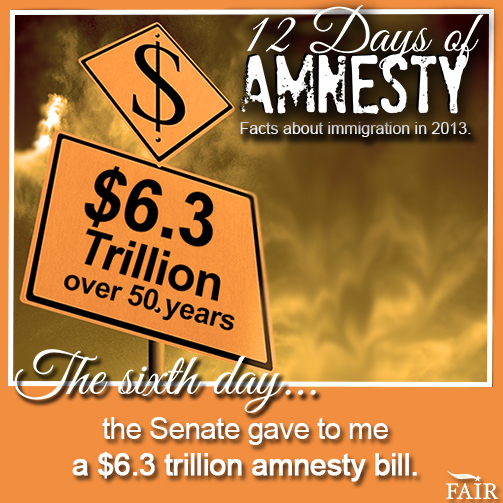 Earlier this year, the Senate considered and subsequently passed a bill (S. 744) that would not only grant amnesty to illegal aliens but also open our borders to millions of foreign workers.

The net effect of this amnesty and expansion of legal immigration would be $6.3 trillion in costs over 50 years and 33 million new legal workers in the first decade. Considering the U.S. has neither the funds to provide services and benefits to newly amnestied illegal aliens and new immigrants nor an excess of jobs, the Senate bill would be a death sentence for the American taxpayer.

Senate Majority Leader Harry Reid never sent S.744 to the House for consideration because it includes revenue raising provisions, which constitutionally must originate in the House. The bill would almost certainly be “blue-slipped” if were sent to the House.” A House amnesty bill was filed earlier this year by Democrats but has essentially no chance of a floor vote.

So, the Senate amnesty bill is dead – mission accomplished, right?

Not so fast. With the budget (almost) out of the way, House Republican leaders are eager to move immigration legislation in 2014. And even though they won’t bring up the Democrats’ “comprehensive” plan, the Republicans’ piecemeal initiatives could be used as a vehicle to move amnesty in the House.