On the 9th Day of Amnesty, DHS failed to adopt… 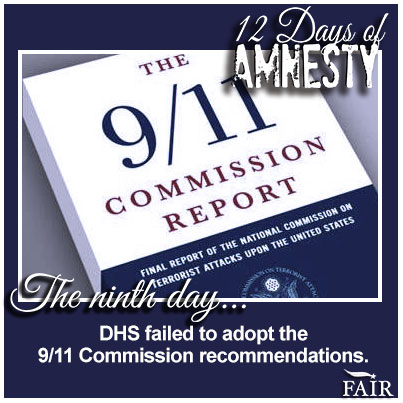 Finding that a biometric entry-exit system could have helped authorities in their search for two 9/11 hijackers in the U.S. on expired visas prior to the attacks of September 11, 2001, the 9/11 Commission recommended that the Department of Homeland Security (DHS) “complete, as quickly as possible, a biometric entry-exit screening system.” Today, over a decade after the attacks, the 9/11 Commission recommendations have still not been adopted.

Despite calls for a finished biometric entry-exit system to be “expeditious” and “quick,” DHS has still not fully implemented the system, now twelve years after 9/11. DHS Assistant Secretary for Policy David Heyman acknowledged this failure in testimony before Congress in November of 2013, saying: “we have yet to implement biometrics into the exit process.”

What’s worse is that several congressional bills considered in 2013 only propose to roll back current law, and would give DHS more leeway to skirt the biometric entry-exit mandate.

In The Tenth Anniversary Report Card: The Status of the 9/11 Commission Recommendations, several 9/11 Commissioners wrote, “As important as it is to know when foreign nationals arrive, it is also important to know when they leave. Full deployment of the biometric exit component… should be a high priority.” If only Congress considered pushing DHS to adopt the 9/11 recommendations as high a priority as granting amnesty to illegal aliens, perhaps the legislative body’s approval rating wouldn’t be in the single digits: 9%.