On the 12th Day of Amnesty, the country’s failed amnesty policy gave to us… 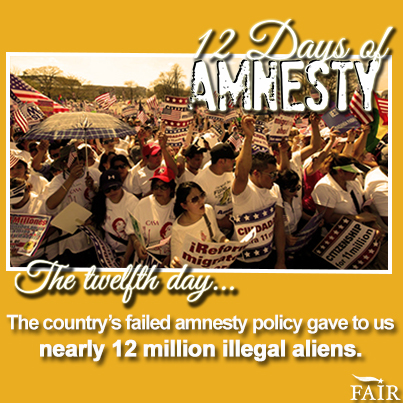 Clearly, amnesty is not a sound immigration policy and if Congress once again caves to the same arguments they heard in 1986, the U.S. will find itself with either another insurmountable illegal immigration problem or an economy, society, and environment not worth sneaking into.

In these 12 days we’ve looked back at only some of the unsettling truths of our broken immigration enforcement apparatus. Enjoy your holidays with your families. 2014 will be yet another year in which we’ll have to stand up for an immigration policy that puts Americans first.