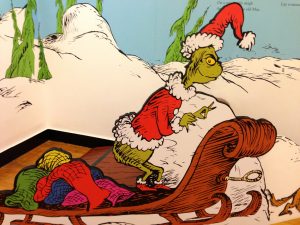 Whoville, USA – New reports indicate that the Grinch—who is suspected of identity theft, animal cruelty, trespassing, and attempted burglary —resided illegally in the United States.  Decades ago, Mr. Grinch used a tourist visa to enter the U.S., and when his visa expired, the Grinch continued to live in a cave just north of Whoville.

On the evening of December 24, disguised in a red coat and hat, Mr. Grinch came up with what he called “a great Grinchy trick” to impersonate Saint Nick.  He broke in and entered several Whoville homes to conduct thefts.  Mr. Grinch, who had already stolen the identity of Santa Claus in order to use his social security benefits and additional elf tax credit, pretended to be the jolly old man during these home invasions.

During one burglary, Grinch was spotted by Cindy Lou Who, and she later reported the incident to authorities.  Responding to Cindy’s tip, the FBI conducted a search for the suspect that night, but because of the absence of a biometric exit component to the entry-exit system, the authorities were unable to determine if he had left the country.

Authorities were able to rescue a small dog named Max found with a big horn tied to his head with red thread.  The Whoville Humane Society is currently taking care of Max and helping him recover from exhaustion.

Mr. Grinch, who is easily recognized by his green complexion, was recently spotted carving roast beast at a feast4amnesty and circulating a story that he is otherwise law-abiding.