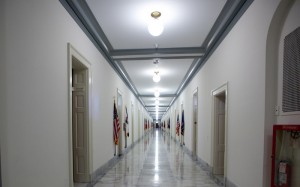 On Wednesday morning, Speaker John Boehner (R-Ohio) informed House Republicans during a closed-door meeting that House leaders “are working on a standards or principles document” on immigration reform.

Boehner’s brief comment was made at the beginning of the meeting, and he did not delve into any details about what the principles would be or when they would be released.  A Washington Post reporter tweeted that the document’s release date is “weeks away.” Some sources say that Boehner’s goal is to present the document at the upcoming GOP retreat on January 29.

The timeframe for acting on this principles document by moving on specific legislation is also unclear.  One report noted that Speaker Boehner is expected to wait until “after consultation at retreat in late Jan[uary], maybe even primary season” to act on the principles. Republican Members of Congress in the cloakroom reportedly told the press that Boehner’s remarks do not mean anything is coming to floor soon.  However, one House GOP Congressman expressed a different understanding.  Rep. Peter King (R-N.Y.) said, “I got the impression that it’d be sooner rather than later.”