You are at:Home»Politics»An Unfair Trade 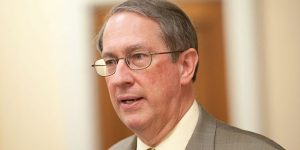 In a recent interview with Telemundo, Bob Goodlatte (R-VA), Chairman of the House Judiciary Committee, made the case for repeating the mistakes of the 1986 deal, when as we all know, Congress traded amnesty for illegal aliens in exchange for promises of future enforcement.  He said: “And if we can have a way to get [immigration enforcement]up and operating– I see no reason why we can’t also have an agreement that– shows how people who are not lawfully here can be able to be lawfully here.”

While during his interview he acknowledges that 1986 was a mistake, he notes he thinks the mistake was simply that the enforcement of 1986 was too dependent on a series of presidents unwilling to enforce the law. “[T]here have been, not just with this president but a history of presidents, [of]not enforcing our immigration laws.” To fix this problem Goodlatte suggests that one of the ways to ensure Americans that the president will fulfill his end of the bargain when it comes to any future amnesties is to allow for “involvement by the states and local governments, not just the federal government, in dealing with the [immigration]issue.”

Unfortunately, Goodlatte’s premises are flawed. First, while Goodlatte may talk of assurances that this president and future presidents will have to enforce any new laws, the truth is that the executive branch already lacks the authority to refuse to execute the laws, but that has not stopped a succession of presidents from ignoring them. Still, Obama, who of course will be the president to implement any law that comes out of this Congress, has surpassed all previous administrations in the extent  and creativity with which he flouts the immigration laws. For example, since taking office President Obama has made a continuous effort to circumvent federal immigration law.  His Administration has put forth several “prosecutorial discretion” initiatives such as the Morton Memos and Deferred Action for Childhood Arrivals (DACA).  There is no end in sight to his quest to grant amnesty by executive fiat.  Just this week, Obama stated he would not wait for Congress to pass legislation: “I’ve got a pen and I’ve got a phone, and I can use that pen to sign executive orders and take executive actions…”

Finally, a deal that trades amnesty for future enforcement is not simply unworkable in practice, it’s an unfair deal in the first place.  What the American people are supposedly getting from such a deal is the right to have their laws enforced in the future: but they should already have that right. The only parties under such a deal to actually receive a benefit are those that broke the law. If their continued stay in America makes leaving a hardship, it is a choice they freely make every day, but a self-imposed hardship does not create an entitlement to stay.

Amnesty Bob Goodlatte enforcement
Previous ArticleLatinos in the U.S. Do Not Face Widespread Discrimination
Next Article All Silent and Calm… Before the Amnesty Storm?