You are at:Home»Politics»Center for American Progress Is At It Again About A Path to Citizenship 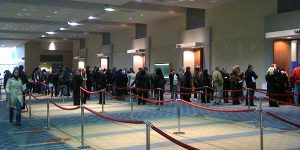 CAP has released a new report arguing that a clear and rapid path to citizenship for immigrants is a benefit to the economy. The report  says, “The literature on new and old immigrant-destination countries shows that the clearer the pathway to citizenship, the greater the gains, and that the optimal waiting period for citizenship is roughly five years.”

The purpose of this publication is to try to convince policymakers that the illegal alien population in the United States should be given ‘a path to citizenship’ (i.e. amnesty) and without any delay.

But, the fact is that the United States already has a clear pathway to citizenship and one that normally requires a waiting period of roughly five years. That pathway exists for legal immigrants.

What CAP is trying to promote is treating illegal newcomers the same as legal newcomers. That is akin to promoting open borders. It is a proposal that would lead to the country being overrun with self-selecting immigrants with a resulting enormous harmful impact on the U.S. quality of life, schools, job opportunities, resource constraints, burdened budgets and a fast growing Tower of Babel.