You are at:Home»Federal»Chuck Schumer Says The Era of Big Government Has Returned

Chuck Schumer, January 23, 2014: The Era of Big Government Has Returned 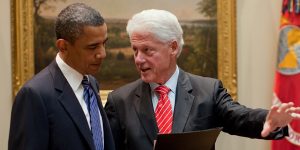 In his 1996 State of the Union address, delivered on January 23rd of that year, Bill Clinton declared that “the era of Big Government is over.” He got a standing ovation for that declaration, particularly from Republicans in the House chamber that evening, even if his obituary for Big Government was a bit premature.

Eighteen years to the day, Sen. Chuck Schumer (D-N.Y.) called for a return to Big Government. “The times are ripe for a renewed and robust defense of government,” Schumer declared in a speech to the far left Center for American Progress (CAP) on January 23, 2014.

No doubt critical to Schumer’s effort to usher in a new era of Big Government (or, perhaps more accurately, an era of even bigger Big Government), is his tireless crusade to gain amnesty for illegal aliens and increase in the influx of low-skilled immigrants who are likely to be dependent on the government.

Perhaps it is no coincidence that Schumer delivered his remarks before a CAP audience. CAP’s founder, John Podesta, has recently moved over the White House as an advisor to President Obama. Podesta has been an advocate of even broader exercise of executive authority to bypass Congress in an effort to fulfill the president’s immigration agenda.

Is anyone in the House Republican leadership paying attention?