You are at:Home»Federal»Congress»Join FAIR for Tonight’s State of the Union

While recent polls* report that immigration is not a top priority for the majority of Americans, President Obama is expected to renew his push for a mass amnesty of illegal aliens in his 2014 State of the Union address tonight.

FAIR will cover the speech live tonight on Twitter, and you can follow us right here at ImmigrationReform.com starting at 9 p.m. eastern.

If you have questions or comments, leave a note below in the comments section or send a tweet to @FAIRimmigration.

If following FAIR on Twitter, use #noamnesty and #SOTU to join the conversation. 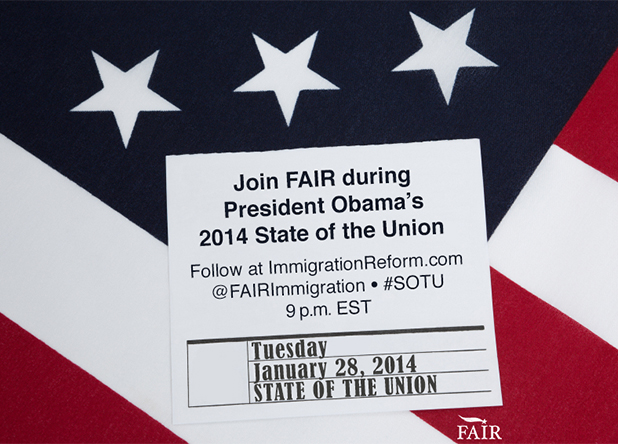 *An NBC News/Wall Street Journal poll released today found that 42% believe “passing new immigration legislation” can be delayed until next year, and 17% believe it shouldn’t be pursued at all (see page 13 for details).

Earlier this month, Gallup reported that only 3% of U.S. adults believe immigration is a priority.