You are at:Home»Federal»Oh, the Irony 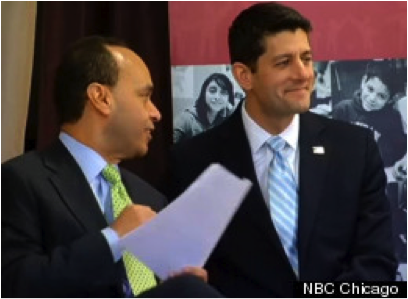 Paul Ryan told the Hispanic Chamber of Commerce in San Antonio, Texas that Republicans “have a hard time trusting this president in enforcing the laws.”  The question to ask Ryan is: Why then is the Republican leadership falling all over itself to pass amnesty and reward the President for the abrogation of his constitutional duty.  (Hint: the answer has something to do with the U.S. Chamber of Commerce.)

A recent Washington Post/ABC News poll question designed to elicit a favorable response in support of amnesty found that a majority of registered voters oppose any legislation that would allow “undocumented immigrants currently living in the United States…the right to live and work here legally.” Another question found that registered voters were much more likely to vote against a candidate that supported amnesty than to vote for that candidate.  (See non-push polls here and here.)  The argument that amnesty would attract more Hispanic voters to the Republican party has been thoroughly dismantled, and all polls find that opposition to amnesty is much stronger among Republicans, so why would the Republican leadership want to alienate voters heading into a crucial midterm election at the same time they hand Democrats a monumental political victory (Hint: see above.)

Ryan gave full-throated support to the Gang of Eight bill which would give the Executive Branch enormous discretion on how to (or how not to) enforce its provisions.  Now Ryan is saying that “we have to find a way to write these laws so that they are actually enforced.”  However, he “[wouldn’t] get into all the details on how to do that, but we have strong opinions on how to do that.”  That the immigration laws passed by Congress are being openly flouted by the Obama Administration demands immediate action, not a strong opinion that it should stop.

Instead of standing up to the President on immigration, Ryan has been working with Rep. Luis Gutierrez to formulate immigration legislation.  Gutierrez has unabashedly said that “I have only one loyalty and that’s to the immigrant community,” and he called ICE agents who uphold immigration law the “Gestapo.” Are Ryan and Gutierrez in agreement on what U.S. immigration policy should be?  It would seem so.  Gutierrez says that Ryan is his “guiding light” and Ryan promotes those comments on his website.

When the National Review, The Weekly Standard, and Joe Scarborough are all urging the Republican leadership to back away from their attempt to sabotage the Republican Party through “piecemeal immigration reform,” it’s clear that Ryan and his fellow traveler are out of touch not just with the Tea Party but with party. Why would the Republican leadership alienate their base, traduce public opinion, and act against the best interest of their country? (Hint: you get the picture by now.)

Yes, Paul Ryan, it is true that the President can’t be trusted to do the right thing on immigration, and it has become obvious that neither can you.