You are at:Home»Politics»A Prime Example of Libertarian Concern Trolling on Immigration 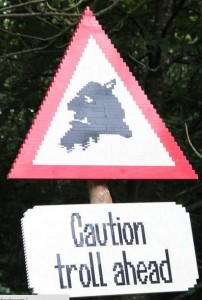 Nick Gillespie, editor at Reason.com has an article at The Daily Beast that provides a perfect example of libertarian concern trolling on immigration enforcement.

The Rational Wiki says that “A concern troll visits sites of an opposing ideology and offers advice on how they could ‘improve’ things, either in their tactical use of rhetoric, site rules, or with more philosophical consistency.”

The Daily Beast isn’t a conservative site, and Gillespie already has a platform at Reason where he (and other writers) can bang the open borders drum.

Instead, this is concern trolling targeted at a general audience of non-Republicans, pointing out supposed inconsistencies in Republican rhetoric on immigration.

Here are two quotes that should establish what Gillespie is trying to do.

“Yet with a Senate majority in plain sight, the GOP faithful is crying that ‘Amnesty=Suicide’ and Republican leaders are calling for massively invasive new rules that will only increase the size, scope, and spending of the federal government. And this is the party of small government? No wonder the country is so screwed.”

“Republicans insist that the federal government is too inefficient and incompetent to deliver the mail or to oversee health care, but it’s nonetheless qualified to police thousands of miles of borders and run employment checks on hundreds of millions of workers? Come on guys, get your story straight.”

The basic gist of this argument is to get the reader to the conclusion that if the GOP were only more libertarian, then they would be consistent. It is not about actually improving the GOP argument on enforcement. Even libertarians acknowledge that law enforcement and protecting national security is a legitimate function of government. (In the eyes of some libertarians, it is the only legitimate function of government.)