You are at:Home»Federal»Does Rubio Deserve a Pat on the Back, Or a Slap Upside the Head? 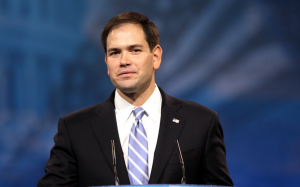 Sen. Marco Rubio (R-Fla.) warned House Republicans, on Wednesday, against falling for Sen. Chuck Schumer’s (D-N.Y.) “Buy Now, Pay Later” immigration deal. “I don’t think he thought that through. I think it’s something he offered up on the air in order to create a political trap,” Rubio said referring to Schumer’s offer on Meet the Press that Republicans could pass amnesty in 2014 and delay implementation until after President Obama leaves office in 2017.

Without actually defining what he means by a piecemeal approach to immigration reform, Rubio dismissed the idea of attempting “comprehensive” immigration reform in one huge incomprehensible bill. “This idea that you either pass one big massive bill or nothing at all, this all-or-nothing approach is going to lead us right back to where we’ve been for 12 years. Nothing.”

Coming from just about any other member of Congress, Rubio’s words of caution would be a refreshing bit of intellectual honesty that is all too rare in Washington. Coming from Rubio, those words are nothing short of infuriating.

Rubio was not just one of the authors of the “all-or-nothing” approach that the Senate took last June when it passed S.744 – some 1,200 pages of benefits for illegal aliens, cheap labor for employers, and utterly worthless enforcement promises to the American people – he was the bill’s chief salesman. Over and over again in the months leading up to the vote in the Senate, Rubio defended the approach to immigration reform he now concedes is unworkable. Had he said then what he is saying now it is quite possible that S.744 would not have gotten the 60 votes it needed to get to the floor of the Senate. At the very least, the bill would not have gained the support of 14 Senate Republicans.

Did Rubio suddenly discover that President Obama cannot be trusted to enforce any of the recycled, enforcement promises in his bill? Did he have a sudden epiphany that the bill that has his name on it gives the president more discretion not to enforce immigration laws, not less?

No, a year ago Rubio walked right into the political trap he now warns against because he thought it would further his political aspirations. Now he realizes that the bill he shilled is a political albatross and is hoping the House will bail him out by burying it.

Better late than never. We hope he succeeds in dissuading the House leadership from walking into the same political trap he did. But, like the president, he’s got a long way to go to restore the trust of the American people.