You are at:Home»Federal»What Else Did Biden Say About Immigration? 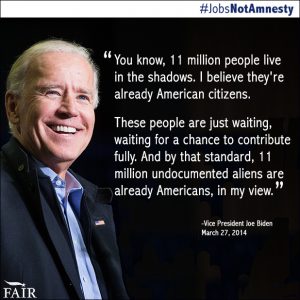 On Thursday, the headlines were covered in articles about Vice President Joe Biden opining that illegal aliens were already American citizens, but that wasn’t all he said.

In his keynote speech before the U.S. Hispanic Chamber of Commerce Legislative Summit on Wednesday, Biden also took the time to praise illegal aliens for their  “courage” to enter the U.S. unlawfully and declared “comprehensive” immigration reform as “central to our foreign policy.”
Buzzfeed reported that Biden linked passing an amnesty bill as important to successful U.S. foreign policy:

Vice President Joe Biden argued overhauling the nation’s immigration laws will not only bolster the U.S. economy but help win “respect” from other countries in the Western Hemisphere.

“When we pass this you’re going to see a different perspective,” Biden said. “Respect is a two-way street and this issue is central to our foreign policy.”

Buried towards the end of an NBC News clip covering the speech, Biden applauds illegal aliens for having the “courage” to enter the U.S. unlawfully:

It takes a whole hell of a lot of courage to be sitting at a wooden kitchen table somewhere — anywhere — in the world and say, “You know what? I tell you what kids. Let’s all pick up and go to America. Where we don’t speak the language. Where they don’t seem to want us. Where it’s going to be really, really rough to get there. But let’s go. Won’t that be fun?” I’m serious.

And in case you missed the coverage from Fox News, Huffington Post and The Hill, here is the full quote that Biden made about considering illegal aliens to be Americans:

You know, 11 million people live in the shadows. I believe they’re already American citizens,” Biden said Thursday at a Washington gathering of the U.S. Hispanic Chamber of Commerce. “These people are just waiting, waiting for a chance to contribute fully. And by that standard, 11 million undocumented aliens are already Americans, in my view.