You are at:Home»Federal»Congress»Talk Radio Hosts Go to DC to Send a Wake Up Call on Immigration 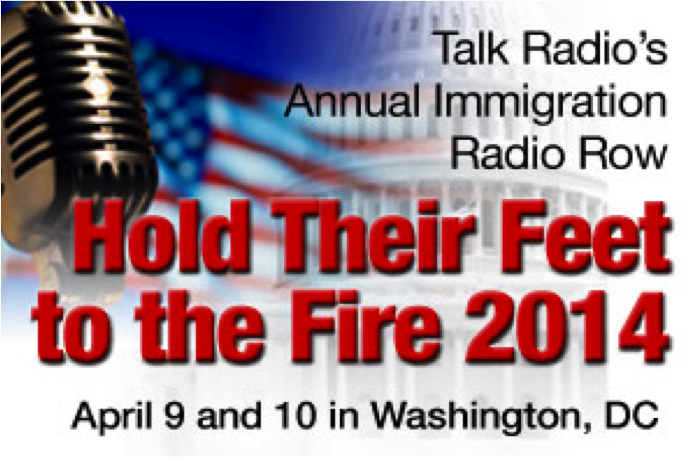 Hold Their Feet to the Fire 2014, an annual radio row organized by FAIR may be one of this year’s best indicators for the future of immigration reform. The event occurs on April 9-10 on Capitol Hill and features the largest gathering ever of talk radio hosts gathered on a single issue.

Dozens of hosts from across the country will spend two days discussing immigration policy with listeners, lawmakers, law enforcement, immigration experts, activists and members of the media live from radio row while broadcasting their shows back to their home markets.

In a Townhall.com op-ed in February, Joyce Kaufman, talk radio host for WFTL in West Palm Beach, Fla. explained the goal of these radio hosts:

In short, do what the law says and what the public wants. It’s not too much to ask and we’ll be pressuring our lawmakers to do it while we’re in Washington.

Hear us, fear us, and join us. We’re talk radio – America’s Electronic Town Hall – and we’re proud of speaking the truth and holding our public officials accountable for the one basic thing we’ve elected them to do; serving our broad national interests.

The radio event occurs while the Department of Homeland Security reviews their deportation practices with a goal of expanding the categories of illegal aliens who will be exempted from removal.

The national radio row will also coincide with – and attempt to blunt – a massive lobbying effort by special interests to resurrect S.744, the Gang of Eight amnesty bill. This occurs with an even more aggressive push by corporate interests to convince House Speaker John Boehner (R-Ohio) to enact legislation that grants them greater access to low-wage foreign labor, even as some 20 million of Americans are unemployed or underemployed.

Hold Their Feet to the Fire 2014 punctuates the increasing GOP divide over the immigration issue. Days after releasing a set of “immigration principles” Boehner backpedaled due to public disapproval and announced that legislation is unlikely in 2014. The Wall Street Journal directly credited talk radio for that decision, a sentiment echoed by NPR:

The truth is, the wind had shifted; and it had taken only a weekend. Within hours of leadership bringing forth its principles on Jan. 30, they were being denounced by conservative activists, bloggers and radio talk shows. The central objection: the idea that those now in the country illegally should have a path, albeit a difficult one, to legal status.

However, Dan Stein, the president of FAIR, warns activists and talk radio that the threat isn’t over:

But the moment the pressure is off, Boehner may proceed. Thus, our goal, and the goal of the hosts participating in Hold Their Feet to the Fire 2014, is to make sure that the House leadership continues to hear the voices of the American people and is reminded that it is their interests that our immigration laws are supposed to serve.

Boehner has already proven this warning to be true. Just 20 days after downplaying any Republican attempts to take up immigration this year, Boehner had a “healthy conversation” with President Obama on the issue. Jay Carney, White House Press Secretary, corroborated Boehner’s report, “I can certainly confirm that immigration was one of the topics they discussed. I can certainly confirm that there is broad agreement that this is an issue that needs to be addressed.”

Since some House Republicans are currently working to sneak a form of amnesty through the National Defense Authorization Act, Hold Their Feet to the Fire 2014 comes at the perfect time to send another wake-up call to Congress.

Amnesty Boehner Dan Stein Gang of Eight Hold Their Feet to the Fire Joyce Kaufman talk radio
Previous ArticleFAIR Alert: Does Your Congressman Support Illegal Aliens Joining our Military?
Next Article Who DREAMed Up Putting Amnesty in the Defense Bill?