You are at:Home»Politics»It’s our 35 Year! Let’s Celebrate, and Get Right Back to Work! 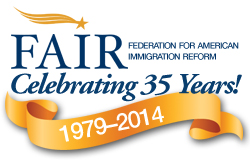 2014 marks 35 years since FAIR’s founding. But no time to celebrate – there’s trouble afoot! The consequences of failure are too profound to be imagined. So what do we stand for during this noteworthy year? We bring the expertise and history to influence the debate. We seek to prevent a repetition of the nation’s mistakes. Repeating past errors is foolish; compounding them with intentional misfeasance is quite another. This is what we are up against and the dimensions of the threat would have been unimaginable just a few years ago.

FAIR is here standing strong to urge a livable, prosperous future for all Americans in the 21st Century; a prosperity that can only be achieved when America restores national self-determination in our immigration policy. Let’s move forward to a nation that can re-join the family of nations able to manage their borders.

In our 35 years, much progress has been made as we have shored up enforcement and prevented the introduction of one special interest policy after another – policies that collectively would have long ago blown the lid off overall immigration. While we have not achieved all our original goals, we have been able to bring wisdom, energy and firmness to the public debates in order to ensure an enlarged view of the national interest.

But now we face a severe crisis: We face an administration determined to permanently roll back our progress and permanently impair the nation’s capacity to enforce our immigration laws. The agenda is simple: prevent the nation from imposing enforceable immigration limits.

President Obama and his congressional allies call what they seek “reform.”  It is no such thing. Reform usually means fixing a problem in order to prevent its recurrence moving forward. This was the premise behind the 1986 Immigration Reform and Control Act. Today the term “reform” seeks to mask a gargantuan special interest give away and bankrupting amnesty program that will permanently undermine economic mobility and the future stability of what remains of the American middle class.

Only truth can stop this madness. As Churchill said, it is not sufficient to do our best; we must do what is necessary to win.

FAIR’s work can only happen with you. There has never been a more challenging time to be engaged in this great cause. We must not stop now. We can continue to make progress together, and I invite you to partner on our journey working to enlighten the way American think about immigration and its proper role in the 21st Century.