Family-based immigration must be limited to spouses and unmarried minor children. Entitlements for extended family migration lead to an immigration system that is not based on merit, runs on autopilot and fosters exponential growth in immigration.

Going hand-in-hand with the True Immigration Reform principle of implementing a merit-based immigration system, the U.S. should take steps to curb chain migration. Under this policy, the overwhelming majority of legally admitted immigrants are eligible simply because they have a relative in the country who can sponsor them rather than what they might be able to contribute to our society.

In 2010, only 7.4% of legal immigrant admissions –or 77,575 individuals –were based on employment or job skills. The overwhelming majority were admitted due to family connections. It’s time for Americans to take back immigration policy.

What is “chain migration”?

Chain migration allows one immigrant to sponsor several relatives for admission. Five years after being admitted as a legal permanent resident, that individual only needs to seek naturalization and demonstrate an income level 25% higher than the poverty level to begin sponsoring other relatives who then sponsor other relatives and perpetuate this cycle.

In 1965, the Immigration and Naturalization Act was amended to expand the definition of “immediate relatives” to emphasize the reunification of extended family members. Previously, U.S. laws limited this category to the spouses and children under 18 of U.S. citizens and legal immigrants.

Since many of these immigrants can be in poverty or near poverty, chain migration creates an enormous glut of legal low-skilled workers who struggle to rise above poverty. In 2007, immigrants were 69% more likely to use welfare programs than non-immigrants, and between 2000-2007, only 60% of legal immigrants entered the U.S. with a high school education or less.

As a result, the problem of chain migration contributes to an already-existing surplus of low-skilled illegal aliens working in the U.S. This increases job competition and drives down wages and conditions to the detriment of American workers. Reforms are needed to ensure that U.S. immigration policies do not harm Americans and instead contribute to a stronger more equitable society. 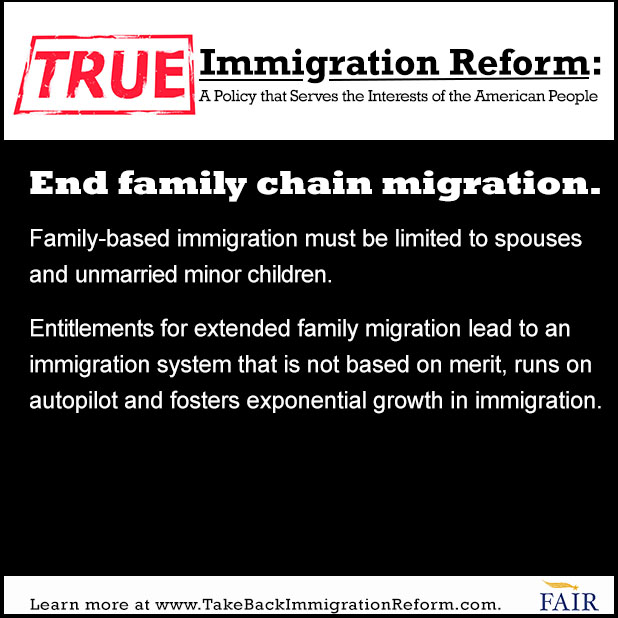 chain migration immediate relatives income inequality legal immigration poverty
Previous ArticleIt’s our 35 Year! Let’s Celebrate, and Get Right Back to Work!
Next Article More U.S. Jobs to be Made Available to Foreign Workers