You are at:Home»Politics»Libertarian Advocacy for Eliminating Penalties Against Illegal Aliens

Writing for the libertarian CATO institute, Alex Nowrasteh wrote on April 23, “Removing the 3/10 Year Bars Is Not Amnesty.” He advocated the elimination of the penalty adopted in 1996 that required an alien who stayed illegally in the U.S. to remain outside the country for a period of three to ten years – the greater penalty for illegal residents for more than one year – before being eligible to legally return.

His argument for eliminating the penalty was that it has led to a major drop in the voluntary departure of illegal aliens, and, he adds, is one reason the number of illegal alien residents soared. He reasons that the adoption of an enhanced enforcement measure had the effect of increasing the illegal alien population.

That argument is not credible if it is put in context. That context is a major strengthening of enforcement against illegal immigration on the southern border. This resulted from a major increase in Border Patrol staffing, fencing, technological upgrades, and other measures. The resulting difficulty in successfully entering the country across that border resulted in an increased reliance upon alien smugglers to guide illegal entrants. And, that meant smuggling fees that increased with the increasing difficulty in breaching he border. 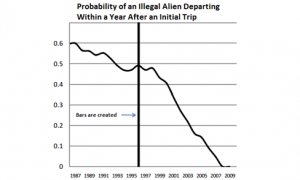 For that reason, illegal residents became increasingly loathe to return to their home countries for visits. That was not the only reason, however. At the same time, the network of formerly illegal aliens granted amnesty in 1986 and subsequent measures tended to spread out from traditional rural agricultural jobs to find new jobs in construction and services away from the border. From there they sent messages to their friends and relatives abroad that jobs were easy to find with inexpensive fake identity cards. When coming to those new job opportunities, the illegal aliens were more inclined to bring family members with them. 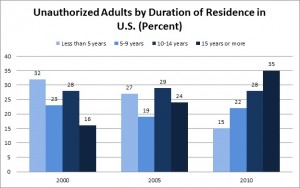 libertarian libertarians
Previous ArticleBeyond The Spin: Obama is Not The ‘Deporter-in-Chief’
Next Article Sorting Through the Laundry List of ENLIST Act Claims