You are at:Home»Federal»Congress»Sorting Through the Laundry List of ENLIST Act Claims 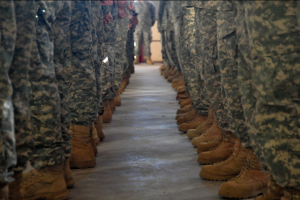 Representative Jeff Denham (R-Calif.) is claiming a lot of things about what his ENLIST Act (H.R. 2377) would do if it were to become law.  He’s pushed the ENLIST Act as a stand-alone bill, and now is trying to get it attached as an amendment to the National Defense Authorization Act (NDAA). Let’s take a closer look at three of his claims and compare them with the actual text of the bill he introduced.

DENHAM CLAIM #1:  The ENLIST Act “would apply solely to kids….”

Is it really fair to consider 35 year-olds “kids”?   Article II of the U.S. Constitution says a 35-year-old can become President of the United States.  That’s a pretty big job the Founders thought was worthy to put on the shoulders of someone Denham apparently deems to be a kid.

DENHAM CLAIM #2:  The ENLIST Act would apply to illegal aliens “who were brought here through no fault of their own…”

THE FACTS: The bill gives illegal aliens green cards upon enlisting and makes them immediately eligible for U.S. citizenship.  Section 2(b) of the ENLIST Act provides that the Secretary of Homeland Security “shall” adjust the status of a qualifying  illegal alien under the legislation who enlists in a regular component of the Army, Navy, Air Force, Marine Corps, or Coast Guard to the status of an alien lawfully admitted for permanent residence (a green card).

Therefore, the Department of Homeland Security actually grants amnesty upon enlistment, before the illegal alien has even served or finished basic training!  Denham’s assertion that illegal aliens will “earn legal permanent status through their service” is misleading.  Is it fair for an illegal alien to receive legal permanent resident status on the first day of basic training? Representative Denham’s proposal would allow exactly that. Moreover, because Denham’s bill does nothing to alter the current process for expedited naturalization for aliens who join the military during times of active military hostility, the illegal aliens don’t just receive a green card before finishing any service, they are immediately eligible for citizenship.

Representative Denham is peddling his vague language on the Hill in order to grant amnesty to many more illegal aliens than his statements would lead you to believe. The ENLIST Act would put illegal aliens on the fast track to citizenship and convert the armed services into a green card processing agency.  For these reasons, other Members of Congress should not sign up for the ENLIST Act.