You are at:Home»Politics»Top 10 Reasons to Oppose the ENLIST Act 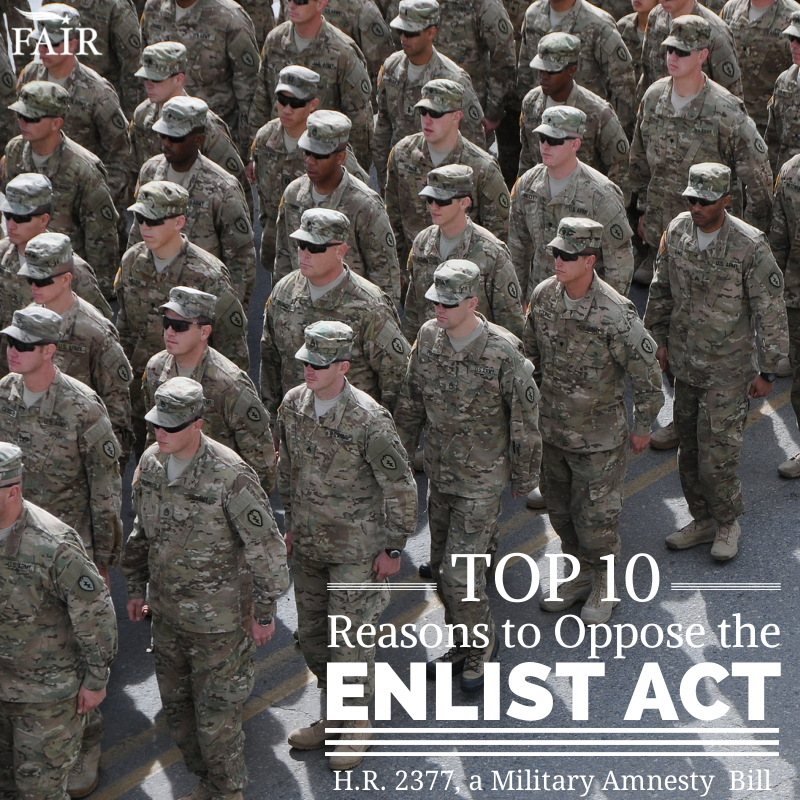 1. The ENLIST Act is amnesty. It undermines the rule of law and is inherently unfair to legal immigrants.
The ENLIST Act gives legal status to illegal aliens, thereby rewarding them with the very objective of their illegal activity. And, by granting green cards upon enlistment, in creates an inherently unfair situation in which one set of people –  illegal aliens – receive better treatment under the law than another – legal immigrants.  The ENLIST Act puts those who broke our immigration laws on par with those who waited patiently in line – often for years ndash; to immigrate to the U.S. legally. Then it puts illegal aliens ahead of would-be immigrants waiting for their green cards outside of the country.

2. The ENLIST Act jeopardizes our national security and public safety.
Illegal aliens lack valid U.S. documents, a necessity for thorough background checks. Without reliable information, it is unlikely the government will be able to verify an alien’s identity and check for any criminal activity in the U.S. or the alien’s home country. This is an invitation to terrorists to fake their eligibility and obtain green cards, allowing them to freely enter and exit the U.S. without further scrutiny.

3. The ENLIST Act grants zero discretion to the Department of Homeland Security to deny green cards.
The ENLIST Act affirmatively requires the Secretary of Homeland Security to automatically give illegal aliens who enlist in the military a green card. Indeed, the ENLIST Act states that the DHS Secretary “shall” adjust the status of an illegal alien who qualifies under the bill and enlists in a regular component of the military to that of a legal permanent resident.

6. The ENLIST Act is not just for “kids.”
There is no age limit on who may qualify for a green card or citizenship under the ENLIST Act. Rather, the ENLIST Act uses the age limit provided under current law for entering the military, which allows for individuals up to the age of 42 to enlist. (10 U.S.C. 505(a))

8. The ENLIST Act is not needed to boost military enlistment.
Each branch of the Armed Services (Army, Navy, Marines, Air Force, Coast Guard) reached or exceeded 100% of their enlistment targets for Fiscal Year 2013 and Fiscal Year 2014. Moreover, the Pentagon currently plans to shrink the Armed Forces over the next three years, the Army alone, by 20%. In effect, reductions in the size of the military, combined with the ENLIST Act, would have the ironic effect of denying U.S. citizens who want to serve the opportunity to do so.

9. The ENLIST Act creates additional burdens for our Armed Forces.
The ENLIST Act would convert the Armed Forces into a green card mill. It would be required to conduct a wave of background checks on illegal alien enlistees, continually transfer information to USCIS, and certify various discharges and types of service in order to enforce the bill’s provisions.

10. The Enlist Act will do nothing to solve our immigration problem, but will encourage even more illegal immigration.
The ENLIST Act does nothing to enforce our immigration laws, eliminate chain migration, protect American workers, ensure public safety, or protect national security. Instead, it sends the message that the U.S. has no intention of enforcing our immigration laws, thereby encouraging even more illegal immigration. It will especially encourage young foreign nationals to sneak across our borders or overstay their visas with the hope that they can legally or fraudulently enlist in the military and obtain green cards for themselves and potentially their family members.