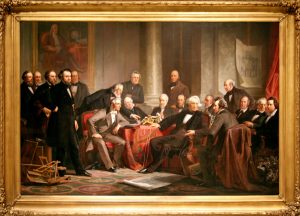 Today on International Workers’ Day, we should take a special moment to recognize Americans. All too often in the debate over immigration policy, American workers are forgotten or devalued.

Just last night, the up-scale D.C. restaurant 1789 hosted a launch event entitled “Accelerating Immigration Reform” with sponsors Partnership for New American Economy, FWD.us, U.S. Chamber of Commerce and featuring U.S. Congressmen Mario Diaz-Balart (R-Florida) and Mick Mulvaney (R-South Carolina). All having “U.S.” or “American” in their names, you would think this event would highlight being an American. Instead, it was an event launching a new political ad advocating for the importation of cheap foreign labor.

The ad airing on TV, online, and in D.C. taxi cabs, a voice proudly declares, “Immigrants invented many of the things we use every day.” The narrator then claims, “Without them, America wouldn’t be America.” The ad tries to demonstrate what it would like without immigrant-made inventions. In the ad, a figure loses his denim jeans and is left in his underwear, because Levi Strauss was an immigrant. More “immigrant inventors” are listed on Partnership for a New Economy’s website. The underlying point of this initiative is insulting. Hard work, creativity, and success are not things only foreigners who migrate into this country have.

Furthermore, the immigrationmade.org website is misleading. Many of very inventors on Partnership for New American Economy’s “Immigrant Made” website would more appropriately be identified as “American” because they were U.S. citizens at the time of their invention. At naturalization, these individuals renounced their previous citizenship. They became fully “American” at that ceremony. “German-American” or other hyphenated status would not be appropriate.

For instance, Levi Strauss became an American 1853, long before his company acquired the patent for riveted blue denim jeans. Then, the inventor of processed cheese even self-identified as an American on his patent application, where it is written, “I, JAMES L. KRAFT, a citizen of the United States, residing at Chicago, in the county of Cook and State of Illinois, have invented or discovered a certain new and Improved Process of Preparing Cheese.” Even Partnership for a New American Economy admits on its “Immigrant Made” website that the  implantation of a heart was done in 1957 by Willem Johan Kolff “after becoming an American citizen” (emphasis added). Also, Eero Saarinen, who invented Tulip chairs and tables and the Womb chair as well as served as an architect on many American projects (Dulles International Airport in Washington, DC, the Gateway Arch in St. Louis, Missouri, the TWA Terminal at Kennedy International Airport, and the CBS headquarters in New York) was naturalized in 1923. Finally, Gholan Peyman, who the Partnership for New American Economy highlights for being “born in Iran” actually proudly lists his U.S. citizenship on his resume along with information on his patent of the LASIK eye surgical procedure.

Today and every day, we should support American workers. Without them, America wouldn’t be America.