You are at:Home»Politics»Memo to Harry Reid: The Koch Brothers are Bankrolling Pro-Amnesty Lobby Effort 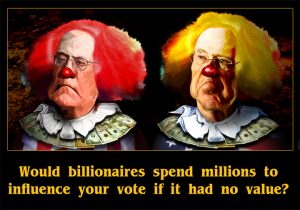 The Democrats’ entire 2014 campaign strategy seems to be based on demonizing the Koch brothers – which is a pretty sure sign they think they’re in big trouble in November.

The effectiveness of that strategy remains to be seen. But, in the meantime, Roll Call reports that the party is going all-in on running against the Koch brothers and their behind-the-scenes efforts to influence a broad range of policy issues.

Washington Post columnist Dana Milbank notes that, “More than 100 times on the Senate floor in the past few months, the Senate’s top Democrat has invoked Charles and David Koch, the billionaire brothers who have pumped hundreds of millions of dollars into conservative causes and campaigns.”

According to Reid, the Koch brothers “are about as un-American as anyone I can imagine” and are attempting to “buy America.” Well, if it is true and what these billionaires are truly engaged in a diabolical plot to undermine the country, then Reid must count himself as one of their prime accomplices.

Guess who is putting up lots of money to pressure House Republicans to pass a massive amnesty and immigration increase bill similar to the one Reid championed in the Senate? That would be none other than the Brothers Koch.