You are at:Home»Immigration Issues»Border Security»Honoring Fallen Law Enforcement in Word and Deed 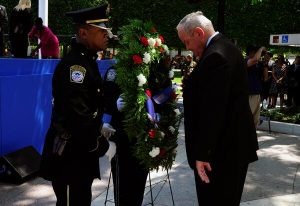 During National Police Week, we should recognize the sacrifices of our law enforcement.  In particular, CBP agents have been assaulted 6,000 times since 2007. Over that period, three agents died as a result of the assault. Since 2010, agents have been assaulted with rocks 1,713 times.  In one instance that occurred in January of this year, a rock measuring 6-inches in length and thrown from Mexico hit a helmeted U.S. Border Patrol agent at the Tecate Port of Entry and knocked him off an all-terrain vehicle.

However, in March 2014, the Obama Administration published a directive limiting law enforcement officers’ use of force against rock throwers. (For more information on this directive, see FAIR’s legislative update.) In response, Shawn P. Moran, vice president of the National Border Patrol Council, an AFL-CIO affiliated union that represents over 17,000 Border Patrol agents, said that the directive “seems to be a response to political pressure from special interests.” Moran described the directive as “shortsighted” and explained the dangerous circumstances that Border Patrol officers are in:

Border Patrol agents are often on foot and outnumbered when encountering illegal aliens and smugglers, and are trained to close the distance with suspects in order to quickly control and arrest them. This often puts agents in a situation where they are assaulted by rocks. Additional agents may be miles away and less-than-lethal weapons unavailable. An assault that may commence quickly leaves agents at a tactical disadvantage and with little recourse other than to use their firearm to defend themselves.

Truly standing with law enforcement means going beyond the words of a press release and putting forward policies for Border Patrol agents who put their lives on the line. This means giving them—not taking away—the ability to protect themselves as they protect our borders and our country.

law enforcement Police
Previous ArticleMcKeon Recognizes Military Amnesty Could Make it into Defense Bill
Next Article Amnesty in the NDAA is Not Open, Honest, or Fair