You are at:Home»Federal»Congress»There are No Amnesty Supporters in Republican Primaries

House Majority Leader Eric Cantor (R-Va.) is facing a primary opponent, David Brat, who is challenging him on immigration. Cantor is fighting back by portraying himself as an anti-amnesty champion, like Renee Ellmers successfully did before him. Cantor, along with others in the GOP House leadership, began the year by endorsing amnesty for the bulk of the nation’s illegal aliens with the House’s “Standards for Immigration Reform.” 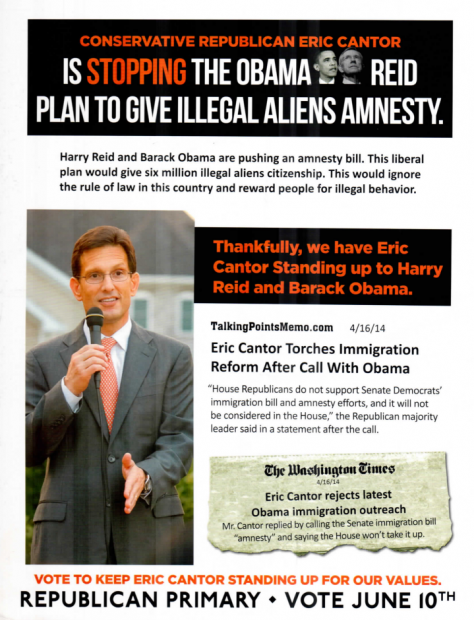 That was January; this is May. Cantor’s campaign has now dropped a campaign flyer into GOP voter’s boxes spouting a very different message. This flyer is as anti-amnesty as it gets. It says: “Conservative Republican Eric Cantor is stopping the Obama-Reid Plan to give illegal aliens amnesty.” The flyer also brings attention to a Talkingpointsmemo.com headline which proclaims that “[Cantor]Torches Immigration Reform after Call with Obama,” a call that the White House described as “pleasant.”

Yet, only last month, Majority Leader Cantor pledged support for Jeff Denham’s military amnesty, the ENLIST Act, and reiterated this support last week. Cantor has also been working on his own version of the DREAM Act, which he has styled the “Kids Act,” since last year.

Interestingly, Majority Leader Cantor is also getting support from pro amnesty groups and pro amnesty lawmakers across the aisle in his contention that he has been a major obstacle for passing amnesty. Frank Sharry, director of the amnesty lobbying group America’s Voice, said last week: “Eric Cantor is the No. 1 guy standing between the American people and immigration reform.” 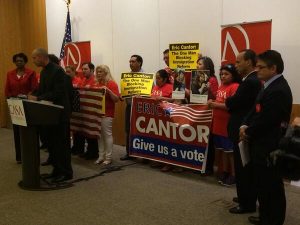 On Sunday, the pro-amnesty group Casa di Virginia sent protestors to storm Rep. Cantor’s Arlington Virginia condo, again calling him “the one man blocking immigration reform.” Representative Luis Gutierrez (D-Ill.), who last year went on a tour with Rep. Cantor in New York City in support of passing bipartisan immigration legislation, sent out a press release through Casa di Virginia stating that he would hold a rally on May 28 in Virginia’s capitol to call attention to the “particularly important role” of Rep. Cantor in immigration.

But is it Eric Cantor standing in the way of amnesty, or Eric Cantor’s primary? We’ll know on June 10th.