You are at:Home»Federal»Solving the Surge Isn’t Hard – But Only if Obama Acts 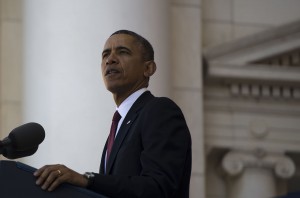 The current surge of unaccompanied illegal alien minors does indeed put children at risk, and as such, “humanitarian crisis” applies.  But given that the chaos has been created by an administration that refuses to enforce the laws as Congress intended, it is also a “constitutional crisis,” although its continuation is not inevitable.  Several simple steps can be taken to slow the flow, if not stop illegal entry altogether.

Expand Texas border fence. The Texas-Mexico border makes up 1,254 miles of the total 1,900-mile-long U.S.-Mexico border. Therefore, if only 315 miles of Texas fencing is built, 75% of the Texas border is (de)fenceless, albeit the Rio Grande River provides somewhat of an obstacle.

Deploy National Guard. The Guard has successfully provided border surveillance and intelligence-gathering support in the past. While they don’t conduct immigration enforcement, their presence is intimidating to people coming across who shouldn’t be and they help free up the Border Patrol to carry out its mission more effectively.  The Guard is a force multiplier and their deployment is a reasonable and necessary component of border security, especially now.

Establish expedited processing centers.  Illegal aliens from Central America, unlike illegal aliens from Mexico, cannot by law be immediately turned back. They must be placed in formal removal proceedings.  The Obama Administration could, if it really wanted to, convert an existing military base into a hearing location on or near the border, staff it quickly with judges and support staff, expedite the process and initiate rapid returns.  Instead, the administration is focused on expanding detention facilities and working with advocacy groups to locate pro bono counsel for the illegal aliens with the end goal of ensuring their permanent stay in the U.S.

Cut off aid to Honduras, Central Americaunless they discourage migration north and accept returns.  Instead, the Obama administration is adding $255 million on top of existing aid to discourage trafficking.  Ironically, that money will most likely wind up in the hands of the very cartels and gangs that facilitate the smuggling of illegal aliens north. This week, Rep. Candice Miller (R-MI) suggested as much, even urging the U.S. to repeal the North American and Central Free Trade Agreements (NAFTA and CAFTA) until Mexico and other Central American countries reestablish order and take aggressive steps to stop illegal migration to the U.S.

Declare for the international audience that America will enforce its immigration laws. Sending Vice President Joe Biden to Central America to advise its citizens that if they enter the U.S. illegally they’ll be turned back is a positive step.  Unfortunately, Biden simultaneously revealed exactly how to exploit asylum claims and assure illegal aliens a permanent stay, thereby sending a useless mixed message…and one might speculate a deliberate one.  President Obama must forcefully articulate on a televised address that illegal aliens will be removed, all laws as Congress wrote will be enforced, and amnesty is off the table now and in the future.   And if he does not, Congress must reassert its authority to compel him to do so.

In the absence of that, the problem will continue.  If America does not care about its laws, why should illegal aliens be interested in obeying them?