You are at:Home»Immigration Issues»Education»Business Roundtable, Can We Agree To Call A Spade A Spade? 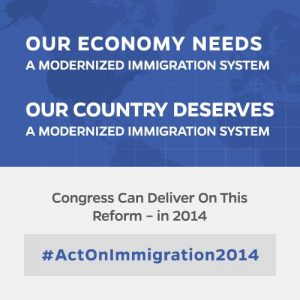 The Business Roundtable ran a full page ad in Politico on Wednesday, imploring Congress to pass “immigration reform” in 2014.

I agree!  Americans need and deserve a modernized immigration system.  But the “immigration reform” this business lobby is pushing isn’t exactly the model of modernity.

The United States brings in over 1 million legal immigrants every year —considerably more than any developed nation.  But most immigrants are selected based on who they are related to (extended-family), not what they know (skills).

Good,  hard-working people across the globe are eager to participate in America’s prosperous free enterprise system, but not everyone’s skills match our needs as a nation. It’s up to Congress to decide who gets to come.

The business community is adamant that we need more high-skill labor.  But they don’t seem willing to make reductions elsewhere to accommodate this shift towards skills.  Instead, they want to pile on yet another visa category, as if the United States’ economy and resources are limitless.

If indeed the Business Roundtable wants a modernized immigration system, then they should be challenged  to push for reform that fundamentally shifts us from a nepotistic to skill-based preference system instead of greedily asking for another scoop of ice-cream on top of their generous sundae.

If, however, they want to suppress wages by importing more of both low and high-skill labor than our labor market can support, then their lobbying effort needs to be exposed for what it is.  The “immigration reform” they call for may help their bottom lines, but it floods the labor market and is a driving force behind the stagnant wages we are witnessing today.

We do need a modernized legal immigration system. But the one being pushed by the business lobby is anything but modern and progressive.

economy immigration reform
Previous ArticleOne Year Later: S.744’s Approach to Immigration Reform Failed Without Being Enacted
Next Article What are the Responsibilities of the Governments of the Sending Countries in the Border Crisis?